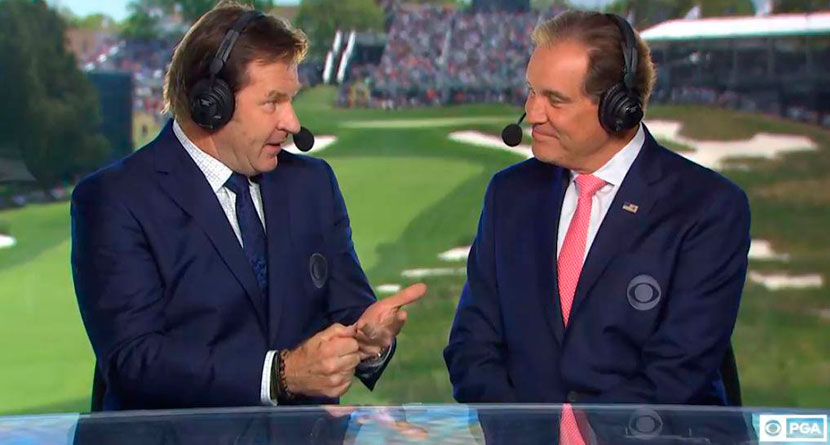 Broadcasting golf on television is a delicate dance in which the rights holders often don’t get the credit they deserve. Golf is the only sport that has 18 completely different playing fields, multiple cameras on most — if not all — the holes and up to 70 or more balls in motion at the same time.

With that in mind, we were treated to a funny exchange on Sunday at the Rocket Mortgage Classic as the behind-the-scenes shuffling was in full flight, and you, the viewer, may have been none the wiser to what transpired unless you were listening to CBS’ broadcast very intently.

With Nate Lashley well on his way to his first PGA Tour victory, CBS was attempting to create storylines out of the race for runner-up, which included Brian Stuard, a 36-year-old Michigan native who has been on the PGA Tour full-time for the last seven years.

Late on the front nine on Sunday, Gary McCord was calling Stuard’s approach shot and compared his swing to that of Lee Trevino, explaining the differences and throwing it to Nick Faldo in the 18th tower to confirm his comparison.

“This guy’s swing looks like Trevino, except Trevino held on just a little bit more,” McCord said. “Short, hooded, but he hooks it. Doesn’t it, Nick? Doesn’t it look like kind of Trevino if he opened it up and cut it?”

The only problem was that Faldo was either not in his chair, not paying attention or both because an interesting voice came in: Nantz’s, clearly doing a British accent.

When you gotta cover for your buddy at work. ?? pic.twitter.com/2TRDOMd716

“Eh, I guess you could say so,” Nantz said in his best Faldo voice.

Immediately after Nantz finished, the sentence, subdued giggling could be heard on the broadcast.

Shortly after the impersonation, Nantz welcomed a Rocket Mortgage suit into the booth, which further explained why Faldo had likely dipped out his normal chair to make way for the sponsor interview.

Either way, the impersonation added some much-needed interest into a PGA Tour Sunday that lacked much drama on the course.