Nelly Korda Rallies To Win Pelican, Returns To No. 1 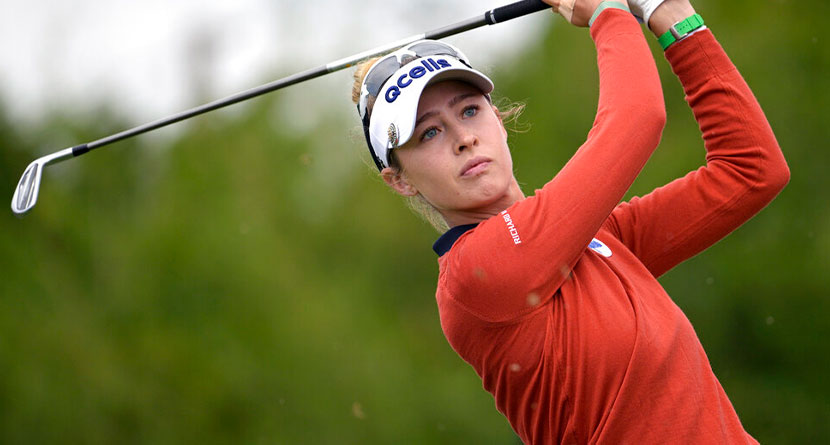 BELLEAIR, Fla. (AP) — A year Nelly Korda would like to forget is ending with the American star in a familiar position as the No. 1 player in women’s golf.

Locked in a battle with Lexi Thompson along the back nine, Korda pulled ahead with birdies on the 16th and 17th hole and held on for a 6-under 64 for a one-shot victory Sunday in the Pelican Women’s Championship.

Korda won at Pelican Golf Club for the second straight year, this one elevating her past Thai teenager Atthaya Thitikul to reclaim the No. 1 ranking.

Korda started the year at No. 1, but then she missed four months with a blood clot in her left arm and has been struggling to regain her form ever since. Her only victory was in the Aramco Team Series in Spain on the Ladies European Tour.

This was her first LPGA Tour title, and the tears when it was over were evident how much it meant to her after all her struggles.

“Honestly, amazing,” she said about her return to No. 1. “It’s been a tough year. I missed two cuts in Arkansas and Dallas, but I kept my head high and worked really hard. It feels really good to be on top.”

.@NellyKorda wasn’t sure how the rest of her season would go after suffering from a blood clot earlier this year.

With a win in the second to last event of the year, this one feels a little sweeter 🙌 pic.twitter.com/wsiQbvkJOE

Thompson ran off four straight birdies on the front nine to take the lead, and Korda stayed right with her.

They were tied when Korda, in the group in front of Thompson, birdied the 16th. Then, Korda hit driver on the short 17th that set up a 10-foot birdie putt. Thompson couldn’t match it. Her wedge was badly misjudged because of the spin, and it rolled all the way off the green and left Thompson scrambling for par.

It was the second straight year Thompson, who hasn’t won on the LPGA Tour in more than three years, let a chance to win at Pelican Golf Club get away from her.

A year ago, Korda birdied the 18th and Thompson made bogey, a two-shot swing that led to a playoff that Korda won with a birdie.

This time, Korda’s approach to the 18th sailed over the green and she had to two-putt from some 30 feet to escape with bogey and post a 14-under 196.

That gave Thompson a chance for a two-shot swing by making birdie to force a playoff. But she hooked her tee shot into light rough, and her approach from about 187 yards into the wind went right and long, narrowly avoiding the water.

Thompson’s pitch settled 2 feet away. The par gave her a 66 and a runner-up finish.

Allisen Corpuz, an LPGA Tour rookie who started the final round with a one-shot lead, birdied two of her last four holes for a 69 to finish alone in third.

The leading 60 players in the Race to the CME Globe advance to the season-ending Tour Championship next week in Naples.

Maria Fassi of Mexico won’t be joining them. The 24-year-old Mexican, who began the tournament with a 62 in search of her first LPGA victory, was right on the edge of making it to the CME Group Tour Championship with two holes to play.

But she hit 3-wood off the 17th tee into a bunker, caught it heavy and failed to save par from about 30 yards short of the green. Needing par on the tough 18th, Fassi left herself a 60-foot putt over two ridges. She didn’t get past the second ridge, and the three-putt bogey gave her a 71 and a three-way tie for seventh.

Fassi, who came into the week at No. 72, finished at No. 65 in the points race. The top 63 get into Naples because three players won’t be going.

The final spot for the $7 million purse next week — the winner gets $2 million, a record for women’s golf — went to Ariya Jutanugarn, who had missed the cut at Pelican.