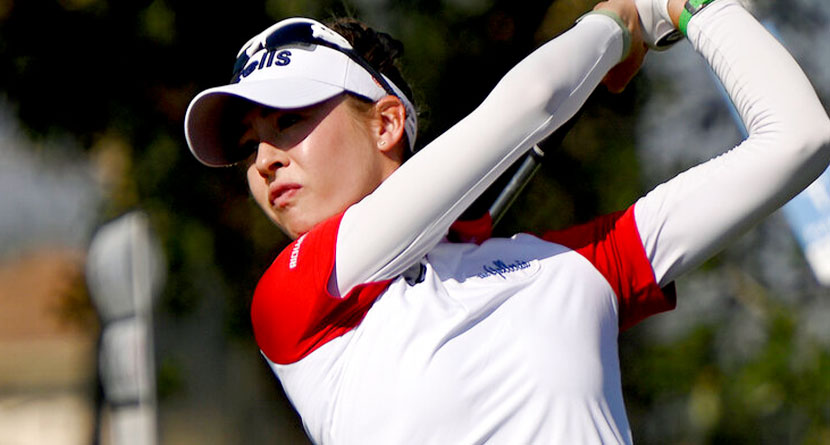 ORLANDO, Fla. (AP) — Lee Trevino was holding court on the practice range at the PNC Championship as only he can, mixing swing advice with Merry Mex humor. He stopped to watch one player swing.

It was Nelly Korda, and he joined a growing fan club.


“These boys better be happy you’re on the LPGA,” Trevino called out to her.

Korda has played the PNC Championship twice with her father and has done plenty to raise her profile. She was giddy upon meeting Tiger Woods last year and playing with Trevino. This time, all eyes were on her sweet swing.

Lee Trevino on the range. There was only one golf swing he stopped to watch: Nelly Korda

“I’ve played with a lot of guys in my time. Let me tell you, I’ve never been so impressed by anyone as this lady right here. I’m telling you, these boys better be happy you’re on the LPGA.” pic.twitter.com/fXIcL9JYC4

Jordan Spieth’s advice to his father before the first round was to “swing like Nelly.” On Sunday, Spieth was still raving about her, comparing the efficiency of her swing with Adam Scott.

“I think she only hit three shots that didn’t go exactly where she was aiming,” Spieth said of their pairing the first round.

It capped a big two weeks for Korda, a happy ending to a year in which she missed four months because of a blood clot in her arm. The previous week was the QBE Shootout, where she played with Denny McCarthy.

Max Homa wondered how she ever lost on the LPGA Tour and said it was a testament to the other players on the women’s tour “that anyone can even sniff beating her.”

Kevin Kisner took it a step further: “I think I called her the Tiger Woods of the LPGA Tour at one point. She’s hit every shot just like she wants to for eight holes.

Korda deflected the attention and shared it with her tourmates.

“It’s been really cool to see the kind of feedback that I’ve gotten from the guys,” she said. “They should come out to an LPGA event and watch all the girls play out there because they’ll be equally impressed with everyone out there.”