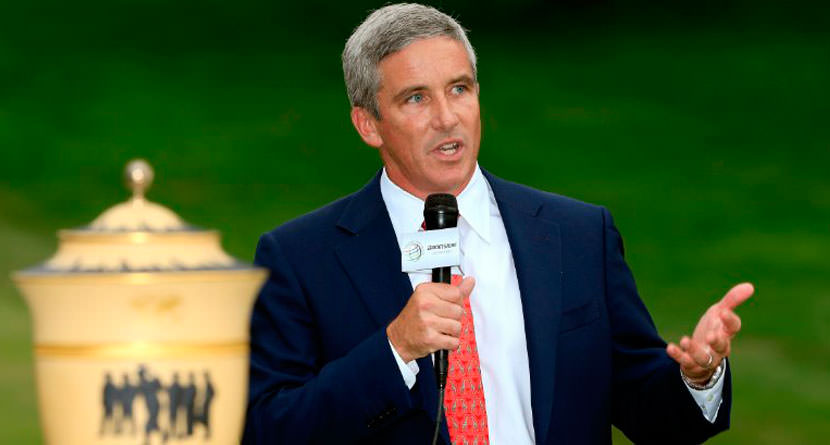 The new PGA Tour commissioner, Jay Monahan, will oversee the first event of his tenure this week at the SBS Tournament of Champions in Hawaii. Monahan has no shortage of big ideas to implement, not to mention filling the large shoes of the diminutive Tim Finchem.

Speaking with the Wall Street Journal‘s Brian Costa Monahan pulled back the curtain on a few of his biggest plans for the future of the PGA Tour, which includes moving the fourth and fifth* majors to new dates and the possibility of a PGA Tour television network

The PGA Tour is trying to rearrange the golf calendar in a way that would maximize attention on the sport during the months when the NFL is not in season. That means moving the Players Championship from May to March, moving the PGA Championship from August to May and ending the FedEx Cup playoffs on Labor Day weekend instead of late September.

“That’s certainly something that we would like to see happen,” Monahan said. “Having big events every month, culminating in the FedEx Cup playoffs in August prior to the NFL season, that would be a very powerful schedule.”

Such a change would require the cooperation of the PGA of America, a separate organization that runs the PGA Championship but also has a seat on the policy board that oversees the PGA Tour. Monahan said it is unlikely to happen in 2018.

New PGA Tour commissioner Jay Monahan on the future of golf on TV, changes to the schedule, slow play and more: https://t.co/g9zvwyT7nz

Change could some sooner on the television side of the business. The PGA Tour has broadcast agreements with CBS, NBC and Golf Channel that run through 2021. But the Tour can opt out of the CBS and NBC deals in 2018, and Monahan would not rule out the possibility that it will do so.

The Tour has explored the possibility of starting its own cable network, which the NFL, NBA, NHL and Major League Baseball have all done. But Monahan said it is not necessarily determined to do so.

“That’s not a core goal,” he said. “Could it happen?” He remained silent for several seconds, leaving the question unanswered.

The primary reason for the shift in the schedule is golf’s inclusion in the Olympic games. As Bob Harig of ESPN.com reported, PGA of America CEO Pete Bevacqua already seems to be on board with a schedule change.

“We are huge proponents of the Olympics,” Bevacqua told Golf Channel at the PGA’s annual meetings. “We are all about the Olympics, but we also have to protect the PGA Championship, and we can’t just bounce the PGA Championship around every four years. To truly make it work, to make it succeed and to make sure golf is in the Olympics for the next century, the whole schedule needs to be adjusted.”