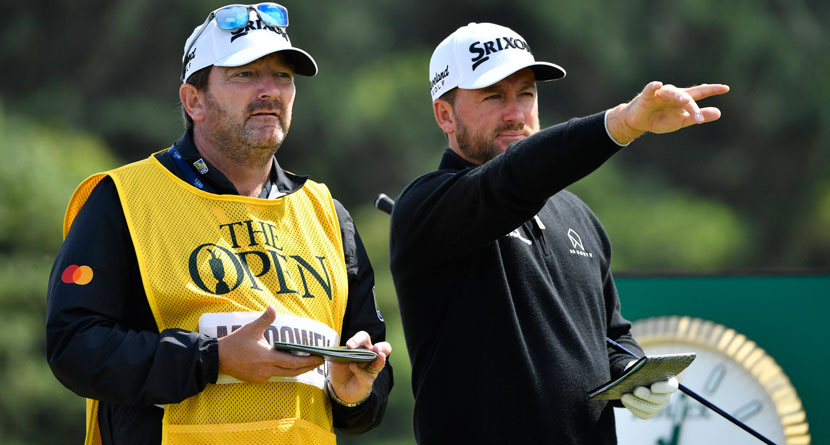 Well before Northern Ireland’s odds-on best hope, Rory McIlroy, doomed his opening round with one swing of the club, Graeme McDowell and Darren Clarke announced themselves as contenders for low Ulsterman with stellar early-morning rounds.

Clarke, who hit the first tee shot of the Open, got it to 3-under par through five holes to briefly lead the championship before giving all three shots back to shoot even par. Better yet, McDowell reached 3-under par through 14 holes and looked to post a number as the lone Portrush native in the field.

In-Course O.B. Dooms McIlroy’s Round At The Start

A pair of sloppy bogeys on Nos. 15 and 17 stalled the momentum, but still left McDowell in a good position for the rest of the week assuming he could get it to the house. After shoving his tee shot a bit right of the fairway, disaster struck.

“It was an innocuous tee shot,” McDowell said after the round. “I wasn’t expecting to lose the ball, put it that way. I’m walking down there expecting half a lie, maybe get up short of the green or back into play and try to make four, and can’t find it.”

When McDowell reached the area his ball came to rest, a cadre of people were already searching for it, but couldn’t locate it. With the new Rules of Golf shortening the time allowed for searching for a ball from five minutes to three, every second mattered and his ball was found… after three minutes and 12 seconds.

Rough finish for G-Mac, who found his ball 12 seconds too late, per the new 3 minute rule. pic.twitter.com/hR6GZo2992

Clearly frustrated, McDowell gave his bag an angry kick as he headed back to the teeing ground to hit his third.

“I thought it was a hell of a rule there until about 12 minutes ago,” McDowell said after the round. “Three minutes felt awfully short.”

McDowell ended up carding a triple-bogey seven on the hole and dropped from 1-under par and inside the top-25 to outside the cutline after 18 holes.

“I played beautiful all day,’’ he said. “It’s disappointing. But it was such a special day. Getting off that first tee, I literally had a tear in my eye. It was kind of cool stuff. Then to finish like that, it hurts … it hurts a lot. But it’s golf.

“Listen, you’ve got to take the rough with the smooth and that was rough. And hopefully some more smooth ahead.’’