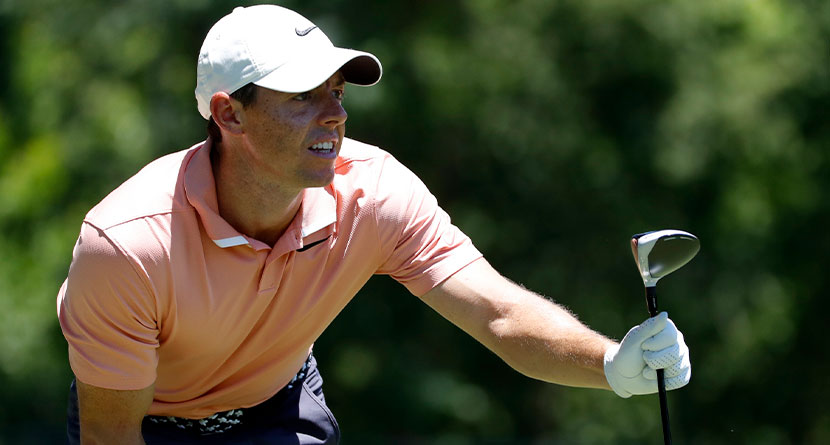 With so many big names near the top of the leaderboard last week at the Charles Schwab Challenge, one could be forgiven for losing track of one or two on Sunday who didn’t have their best stuff when the heat was on, but as the top-ranked player in the world, Rory McIlroy doesn’t enjoy such anonymity.

Hovering three shots back of the 54-hole lead, McIlroy needed 41 strokes to navigate Colonial Country Club’s par-35 front nine, enough to essentially drop McIlroy from coverage and turn him to an afterthought as players dueled down the stretch.

Playing alongside Bryson DeChambeau, McIlroy was often in the periphery of the coverage as DeChambeau used brute force to contend around the Fort Worth course, and on the 13th green, at 5-over par for the day and nine shots back of the lead, CBS Sports’ lead analyst Nick Faldo wondered aloud what ails McIlroy when his game goes wrong.

With a graphic of his scorecard splashed across the screen, the CBS announce crew held a light-hearted conversation before Faldo questioned McIlroy’s mettle when things go awry.

“He seems to have lost the head today,” Faldo said. “Look at that. He needs a second pencil for the back nine.”

“Or an eraser for the front,” Ian Baker-Finch added. “Amazing Nick, the way he was playing?”

“I don’t know. I am only guessing, but he’s such a gutsy player, why does this happen? When it all goes wrong it’s almost like he gets so frustrated, it’s like, ‘I can’t accept it.’

“Looking from the outside, it looks like he doesn’t have a plan B to switch to, (a way to) just to find a way to get around. Just too much frustration going on.”

“He’s such a gutsy player, but why does this happen?”

“I got off to a really bad start,” McIlroy said after posting a 4-over par 74. “Hit a loose second shot on the first hole up to the right and then sort of messed around and took bogey there, so not the ideal start. And then the wind was up today. You didn’t have to be that much off for it to sort of show, and missed a couple of greens in the wrong spots and made bogeys.

“Yeah, I just got off to a bad start. But you know, sort of played all the way to the end, shot a decent back nine. I was a couple under on the back. But front nine I just got into a rut and played a bad run of holes, and obviously, that put me out of the tournament.”

Faldo’s criticism is one that often follows McIlroy around – when he’s on, he’s on, but when he’s off, there’s not much stopping him from imploding.

Of course, it’s only one bad round of golf, albeit one on a Sunday while in contention during the first live sporting event in three months, which may make it seem like a big deal, but we’ve seen this with Rory before.

Remember back to 2019 in the early going – McIlroy had a run of top-6 finishes in the first six events of the 2019 year and was routinely questioned as to why he couldn’t put it together down the stretch to win. What was wrong?

The following week, he went on to win The Players Championship as well as three more times en route to earning PGA Tour Player of the Year honors.

Will that happen again this year? Time will tell.