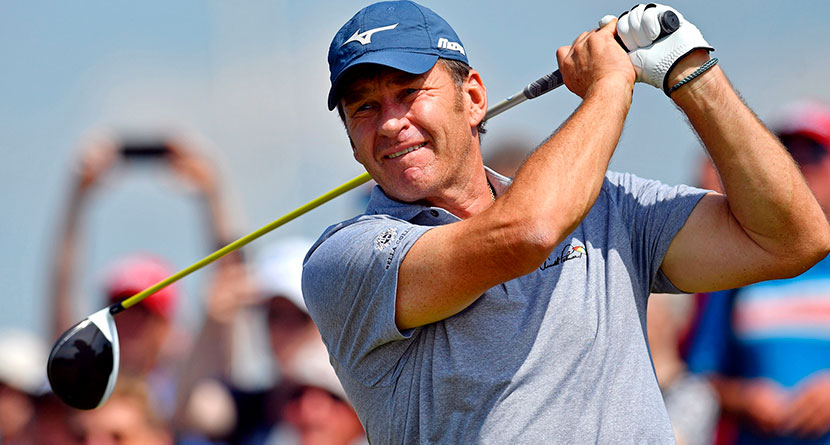 Even with re-opening plans for various states taking shape in the coming days and weeks, sports as we knew them are still more than a month away from returning in any form of normalcy.

With that reality setting in, thoughts and conversations tend to zoom out to broader and longer-term topics, which in golf means pace of play, bifurcation and distance discussions.

That’s exactly where Geoff Shackelford and Sir Nick Faldo went this past weekend on an episode of Shackelford’s podcast, The Shack Show. Faldo, unquestionably one of the greatest golfers of the last 40 years, believes that there are a few avenues that governing bodies or the game’s other top powerbrokers can take to scale back the distance issue.


“Back in persimmon days, and balata ball, there were only a handful of really great drivers,” Faldo said. “Obviously, Greg (Norman) was great, and Jack (Nicklaus). Obviously (Lee) Trevino was great for his way, (Tom) Watson, Seve (Ballesteros) was a great driver; I know it went sideways at times… but you can name them. It was only a dozen max. Now there’s only a dozen poor drivers. There’s only a few… I hate to think of the percentage who can hit it 300 through the air.

“If we brought the size of the face down so there were some serious mis-hits, so the sweet spot for the pro is a real sweet spot, not a sweet face; that’s what it is now. It’s the whole thing!”

Put Nick Faldo down as a reduce-the-driver-head size kind of guy. From this week’s Shack Show. https://t.co/xiYSn6zRzx pic.twitter.com/37ust56D1k

Reducing the head of the driver isn’t a revolutionary or novel idea in the age of roll-backs, but Faldo’s next suggestion was one that doesn’t get quite the traction as a reduced head or scaled back golf ball.

“The other simpler way is saying we ban tee pegs,’ Faldo said. “If they went and played a tournament with no tee pegs, right? Well, the guys would have to alter their driver. You would be allowed to place it on the grass.

“Sure, they could hit a 3-wood. That actually would be your optimum. I’ve just seen Rory’s numbers, still 285 yards through the air, but it’d be a real tough hit to get a driver off the deck.”