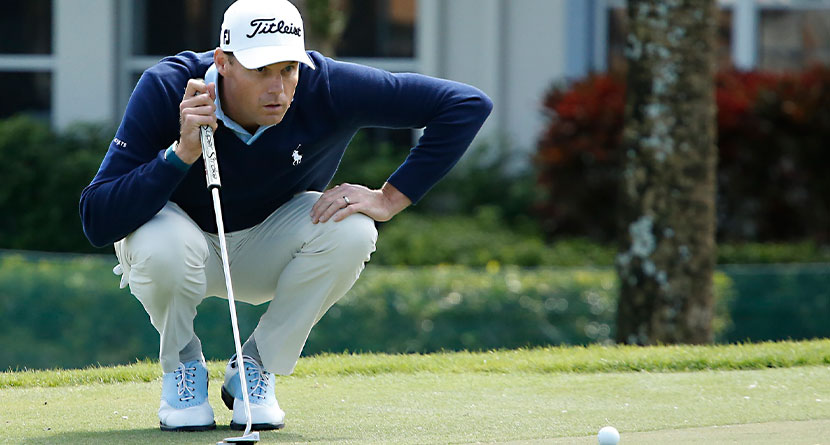 Five-time PGA Tour winner Nick Watney became the first PGA Tour player to test positive for COVID-19 after the 39-year-old displayed symptoms on Friday morning, consulted with a physician and was administered a test.

Watney, who shot a 3-over par 74 in the first round of the RBC Heritage, withdrew from the event and began self-isolating.

“Nick will have the PGA Tour full support throughout his self-isolation and recovery period under CDC guidelines,” the Tour said in a statement. “For the health and well-being of all associated with the tournament and those within the community, the Tour has begun implementing its response plan in consultation with medical experts including working with those who may have had close contact with Nick.”

Nick Watney has withdrawn from the RBC Heritage prior to the second round after testing positive for COVID-19.

He will have the PGA TOUR’s full support throughout his self-isolation and recovery period under CDC guidelines. https://t.co/WLU17W0W2k

The question for the PGA Tour, the first major sports league to return to action following a hiatus precipitated by the coronavirus pandemic, becomes what happens next?

While a positive test is certainly not the best news for the Tour, it’s very clearly something they have planned for.

“The whole plan put in place was, not if, but when somebody tests positive, what’s the protocol, and what are the next steps?” Jordan Spieth, a member of the PGA Tour’s Player Advisory Council, said on Friday. “So I feel confident, just in being on those phone calls, in what the PGA TOUR’s going to do going forward here, and hopefully contact tracing doesn’t lead to anybody else testing positive within the bubble.”

Watney, who flew privately to Hilton Head Island and not on the Tour-chartered plane, tested negative last week at Colonial Country Club for the Charles Schwab Challenge where he missed the cut and he tested negative again upon arrival at Harbour Town Golf Links earlier this week on either Tuesday or Wednesday.

Without hearing directly from Watney, there is some deciphering to do between the Tour’s statement and the events that transpired on Friday morning. What is known is that Watney showed up to the course and was preparing to play amongst other pros – albeit at a safe distance, according to those who revealed encounters.

Brooks Koepka mentioned seeing Watney nearby in the parking lot on Friday morning and Rory McIlroy relayed having had a conversation with Watney on the putting green prior to the second round. McIlroy said Watney texted him when he got word of the positive test as part of the contact tracing protocol.

“He feels badly that he was here today at the golf course,” McIlroy said. “I said, look, it’s fine. You never know. So I said to him, if I was in your position, I probably would have been here, too. Look, at this point, you just have to concentrate on getting better and getting healthy.”

Under the Tour’s protocol, players must self-isolate for 10 days or travel home by car. As an Austin, Texas resident, Watney is believed to be staying in South Carolina for the duration of his quarantine, according to Golf Channel’s Rex Hoggard.

As many on the ground have said, the PGA Tour was preparing to have positive tests over the course of its restart, and the Tour’s chief tournaments and competitions officer Andy Pazder said there is no set threshold that will shut things down, but if there is a spike in cases within the Tour’s bubble, things will need to be reevaluated.