No putter? No problem 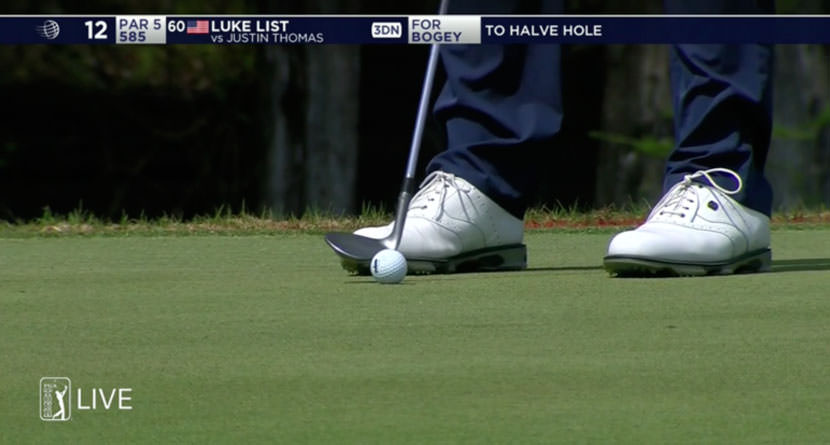 Beating Justin Thomas, the world’s No. 2-ranked golfer is tough enough. How do you attempt to do it without a putter?

That’s the feat that Luke List tried to pull off on the first day of the WGC-Dell Technologies Match Play. List bent his putter after hitting it against a wall in frustration and played the final two-thirds of his match putting with his wedges.

To add degree to do difficulty, Thomas was 3-up , but even with no flat stick List made a run late.

Here he is on 15 putting off the fringe with his wedge, and putting the pressure on.

It got better on 16 when List pulled within one with a birdie putting with the trusty sand wedge.

From 3-down to 1-down, all with a sand wedge as his putter.

Luke List has made a match of it against FedExCup No. 1 Justin Thomas. Two holes left. pic.twitter.com/d8H1RgrRVH

Thomas had his own memorable shots, including this miraculous escape on No. 9.

Alas, it wasn’t meant to be for List, who lost 2-up to Thomas after failing to equal a birdie on 18. List was sheepish after the match, per Golf Digest.

“I was walking off the 6th tee, and I was a little unhappy about the way I was feeling, a little under the weather. And I thought it was like a brush area and I just kind of swiped my putter, and it turned out to be a wall. It bent like a fraction of an inch. So unfortunately I couldn’t use it the rest of the way. Stupid on my part.”

Thomas, on the other hand, wasn’t having any sympathy, according to the Golf Channel.

“He putted probably two or three putts I wouldn’t have made him putt with a putter,” Thomas said. “[No. 13] was a short putt he’s probably going to make. It had a lot of break. But 12, that putt was 2 feet straight uphill. But I was like he’s got a wedge, so I’m going to make him putt it.”

The first day of group play at the Match Play Championship is over with several stellar performances.  Peter Uihlein held off a late birdie run by Rory McIlroy to win 2-and-1 while Charles Howell III knocked off Phil Mickelson 3-and-2.