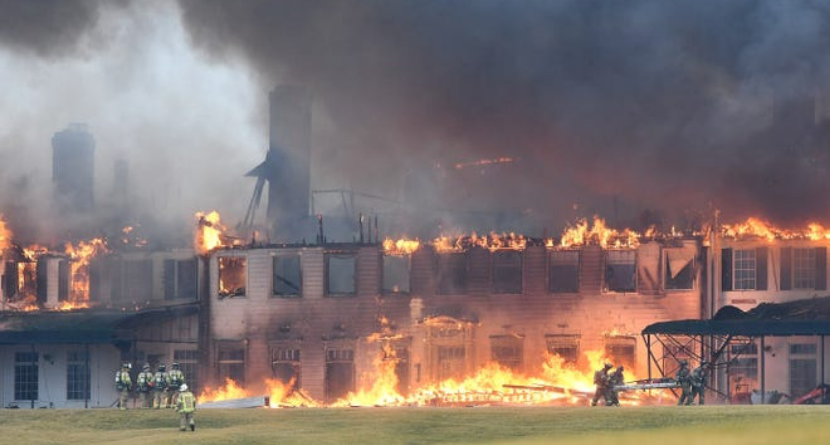 A monument to American golf went up in flames Thursday.

The 110,000-square-foot clubhouse at Oakland Hills Country Club was engulfed in what’s believed to be a catastrophic fire that emanated from its attic, according to multiple reports. Completed in 1922, the building housed a century’s worth of priceless memorabilia from such legendary champions as Ben Hogan, Jack Nicklaus, Arnold Palmer and Tiger Woods.

The blaze started around 10 a.m., according to The Athletic’s Brendan Quinn. By the time local fire crews had gotten it under control, a portion of the roof had collapsed and major damage had been done to the central part of the building. Thanks to reduced winter staffing, there were few occupants in the building when the fire started and all of them got out safely.

The club, which is located in the Detroit suburb of Bloomfield Township, Mich., has hosted six U.S. Opens, three PGA Championships, two U.S. Amateurs and a Ryder Cup, among other prestigious events. It’s due to host the U.S. Women’s Open in 2031 and 2042.

Images from the current fire at Oakland Hills CC are chilling. Building dates back to 1922. Awful.

Video submitted from an individual on the ground: pic.twitter.com/UdiP8G0D7i

“Our thoughts are with our friends at Oakland Hills,” John Bodenhamer, chief championships officer for the USGA, told The Detroit News. “We have been in touch with their staff, and most importantly, are relieved to hear that no one was injured.

“Along with so many others in the golf community, we have special memories at this storied venue and look forward to making more in the coming years. We will support the club wherever possible in this rebuilding process.”

Through the years the clubhouse has undergone numerous renovations, most recently a $16.25 million upgrade in 1999.