Tour Rookie Cameron Young Shoots 8-Under 64, Surges To First Round Lead At The Open 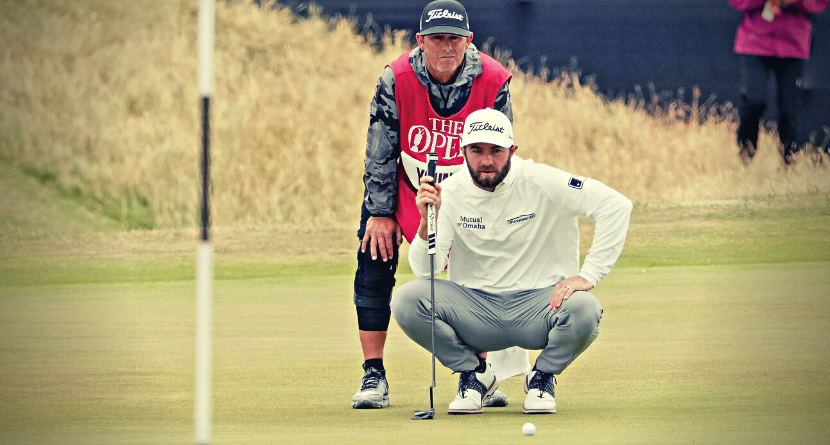 There’s always more to the story than what can fit in a pairings book bio. And to that end, it would be easy for a reporter — particularly during an event of international intrigue — to get crossed up by the journey that led Cameron Young from the Bronx to the top of the Open Championship leaderboard Thursday.

A graduate of Fordham Prep in the Bronx, N.Y., and the son of a club pro, Young, a PGA Tour rookie making his first start in the Open, didn’t exactly take the road less traveled. Yet, here Young is, sitting pretty after an 8-under 64 that put him two shots in front of Rory McIlroy in his first Old Course jaunt.

Cameron Young was quick to dismiss the notion that he grew up on the rough and tumble streets of the Bronx. pic.twitter.com/Ij8Pceng39

“I don’t think that I played a perfect round of golf,” Young said. “I scored really well. And I think we thought our way around the way you have to out there.”

McIlroy’s round wasn’t perfect, either. But it did mark the third straight major championship in which the 33-year-old opened with a 67 or lower, renewing hope for a drought-busting win.

“Fantastic start. Just what you hope will happen when you’re starting off your week,” McIlroy said. “I did everything that you’re supposed to do around St. Andrews.”

Also giving chase are Australia’s Cam Smith and native son Robert Dinwiddie (5-under); LIV interlopers Dustin Johnson, Lee Westwood and Talor Gooch (4-under); and world No. 1 Scottie Scheffler (4-under), to name a few notables from a crowded leaderboard.

The earlier wave benefitted from slightly better playing conditions before the wind picked up in the afternoon.

“It’s the fiddliest Open that I’ve played. It’s the only way I can really describe it,” McIlroy said. “OK, the 18th at Carnoustie was like a runway, that fairway. But around the greens here and just all the slopes and undulations and everything, I think as the tournament progresses, you’re going to get some funny bounces and it’s going to test your patience at times.”

“It’s the way the golf course is set up. It’s how firm it is,” U.S. Open champion Matt Fitzpatrick said after carding a 72. “The way the golf course is designed … to get better angles and better lines, you’ve got to hit across all the fairways. There’s nothing you can do unfortunately about it. It’s just sad more than anything. It’s just ridiculous.”

Fitzpatrick was playing with three-time Open champion Tiger Woods, who posted his second-worst score in the event with a 6-over 78. Woods’ first swing resulted in a brutal break when he split the fairway but found a fresh divot. His next swing found the burn guarding the green, and a long, frustrating day at the office was off and running.

Woods predicted he’ll need a 66 or better to make the weekend.

“Obviously, it has been done,” he said. “Guys did it [Thursday] and that’s my responsibility [Friday] to go ahead and do it. Need to do it.”