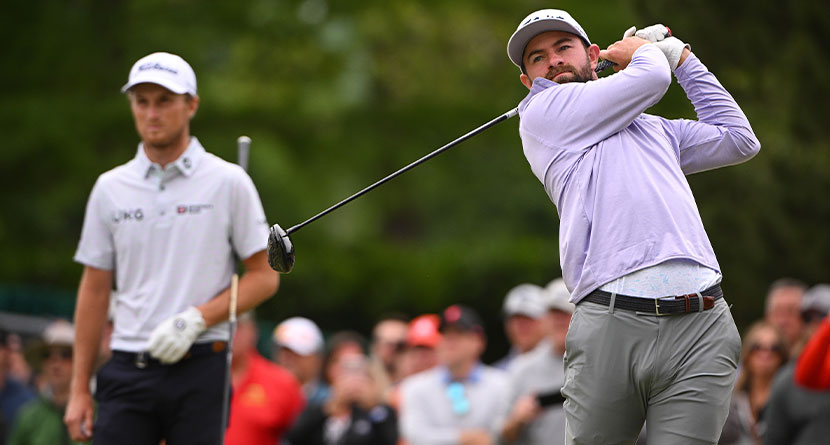 There are more young rising stars in pro golf than ever before.

Entering the week, 11 of the top 12 players in the world are in their 20s. Half of last year’s Korn Ferry Tour graduates qualified for the FedEx Cup Playoffs. Joohyung “Tom” Kim became the second youngest winner on the PGA Tour since 1932 in Greensboro last week and young pros Will Zalatoris, Cameron Young, Mito Pereira, Davis Riley and others have proven this season they have promising careers ahead.

There’s also never been a better time for ardent golf fans to watch golf on a screen. PGA Tour Live’s move to the ESPN Plus platform this year increased access and improved production quality. The expanded Golf Channel coverage on Thursday and Friday afternoons opens a window into what lies ahead on the weekend.

Yet in recent weeks, the Featured Group coverage included Davis Love III and Rickie Fowler. One is a 50-something well past his prime and the other is this generation’s clearest case of underachievement. Better left on shelves collecting dust.

Watching bad golf. Where’s the fun in that?

Meanwhile, the new wave continued to flourish. While the veterans were hacking out of rough and making sloppy bogeys, the future of golf unleashed powerful drives and made smooth putting strokes with fresh nerves.

When putting Featured Groups together, the PGA Tour should forget familiar names and reward the rising crop. This occurred at Detroit GC when former Wake Forest teammates Young and Zalatoris were paired for the first two rounds, but each pro, through consistent performance, has already emerged on the average fan’s radar in the last 12 months.

Thursday and Friday provide a great window for storytelling. The scoreboard is secondary. The broadcasters should borrow from the late, great Vin Scully and share the narrative, providing the backstory on this rich crop of talent. Educate and inform the fans. Tell us something we can’t see or might not know.

Now, more than ever, with the mega millions of the LIV Golf Series posing a serious threat to swipe the young stars from the PGA Tour, it’s important to nurture the future and worry less about those who are past their prime. The Open Champion and world No. 2 Cameron Smith, 28, could be the next to join LIV Golf, after the FedEx Cup Playoffs.

This mini generation plays an exciting brand of golf. They’ve grown up with the best technology, instruction and equipment, embrace analytics to attack the course and bomb 330-yard drives whenever possible. It creates a thrilling ride of eagles and birdies with an occasional double bogey on the side.

They’re not going away; instead, they’re coming by the dozen.

With increased opportunities available through the PGA Tour U program, which rewards the best college players, and the return of Qualifying School next year, it’s going to be more and more difficult for the rank-and-file veterans to maintain exempt status on the strength of consistent top-30 finishes. The young guns are playing to win.

The stars will shine this week in Memphis. They’re all on hand and paired by ranking for the opening rounds. But when the playoffs end and the fall tournaments begin, the PGA Tour and ESPN Plus should work in concert to promote the new Korn Ferry Tour graduates and second-year pros who are certain to contend for titles more frequently.

Step out of your offices, PGA Tour and TV executives, and take a look around. Pro golf is growing younger and getting better. It’s past time to get on board.