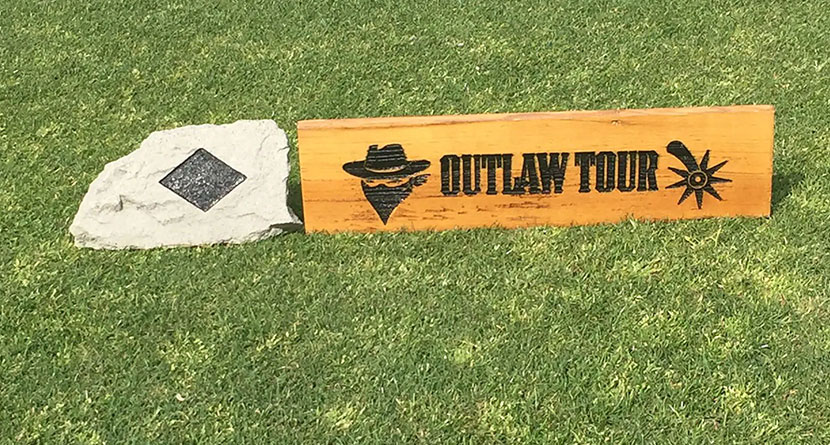 Even while the vast majority is at a standstill amid the coronavirus pandemic, the Rules of Golf remain to roll on. The Outlaw Tour, a mini-tour operating out of Arizona, is still in action during the pandemic offering playing opportunities to competitive golfers willing to put up a few-hundred-dollar entry fee.

This week, however, at the Verrado Founders Championship, 14 of the 60-man field were disqualified after players played from the wrong tee box on par-3 third hole.

The hole, which plays 234 yards from the tips, was moved up by tournament organizers to play about 207 yards during the first round. The Outlaw Tour features very distinctive tee markers — they’re a foot-and-a-half-long with the tour’s logo wood-burned on the side — but the normal club tee markers were also on the course as the venue was open for public play as well.


“Our tee markers look like no other tee marker that I’ve ever seen in my life,” Outlaw tournament director Jesse Burghart said. “It’s pretty hard to not see them, honestly.”

Explanation of what happened:
Tee was set at the 204 plate, scorecard showed hole at 222. First group teed of on the wrong tee, and since there was a backup on that hole other groups followed.
But there was no info from starter that tees had been moved, no rules sheet etc.

Still, group after group headed to the 234-yard tee box instead of the 207-yard tee box, playing the hole from the wrong tee, a breach of Rule 6.1b, which states “if a player who is starting a hole plays a ball from outside the teeing area (including from a wrong set of tee markers for a different teeing location on the same hole or a different hole), the player gets the general penalty (two penalty strokes) and must correct the mistake by playing a ball from inside the teeing area.

“If the player does not correct the mistake before making a stroke to begin another hole or, for the final hole of the round, before returning his or her scorecard, the player is disqualified.”

Indeed, the 14 players who played the hole from the wrong set of tees and continued on were disqualified.

“Obviously they were disappointed,” Burghart told GolfChannel.com. “It’s the first round. I’ve played competitively; it’s not easy to enter these events, so I totally understand that they were frustrated. But at the end of the day, it’s one of our biggest rules that we have to uphold. You’ve got to play from the correct tees.”

Statement from Jesse Burghart who runs the Outlaw Tours event, about the incident yesterday with players playing from the wrong tee. pic.twitter.com/csrAv30HtH

Receiving some blowback from players and fans, Burghart posted to Facebook to defend his decision.

“I stand by my decision to uphold the integrity of the game and the Rules of Golf,” Burghart said. “Penalty for breach of rules is disqualification. It’s very black and white and one of the most important rules to follow. I’ve heard all the name-calling and peanut gallery remarks. At the end of the day, we are supposed to be professional golfers. Ultimately it’s your decision to be one or not.”

The tournament continued on Tuesday and Wednesday with Scottish pro Calum Hill, a rookie on the European Tour this season, winning the tournament.