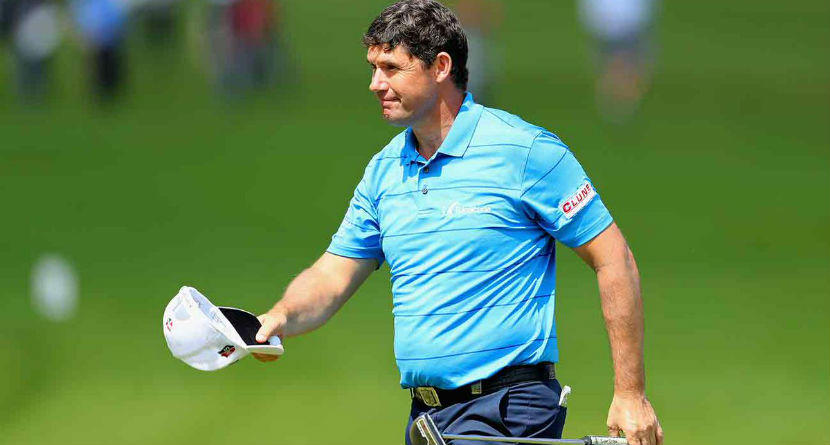 Padraig Harrington saw his career flash before his eyes on Monday when he was struck in the elbow by an amateur he while he was teaching a clinic. The three-time major winner just returned from neck surgery two weeks ago, but the freak injury has forced him to withdraw from this week’s FedEx St Jude Classic.

Just withdrawn from @PGATOUR @fesjcmemphis this week.I was hit on the elbow with a practice swing by an amateur I was coaching at an outing.

“Yesterday I picked up an elbow injury at a golf outing in Washington DC,” Harrington said, according to the Irish Golf Desk. “Whilst coaching an amateur golfer on how to cure his hook, I stepped in close to demonstrate the action for a fade, but as I was stepping away he continued to swing and caught me flush on the elbow.

“My initial thought was that the elbow was shattered and it was the end to my competitive playing career. I nearly fainted with the pain and shock.”

Some would even go so far as to say this is not exactly the luck of the Irish.

Fortunately for the 45-year-old Irishman, the X-ray showed nothing was broken and is expected to only be on the shelf for 12 days.

Thankfully nothing was broken,just 6 stitches. I thought it was the end of me playing competitive golf.

I’ll only be out for 12 days or so to let stitches heal.

In true Paddy fashion, he made light of the painful ordeal: