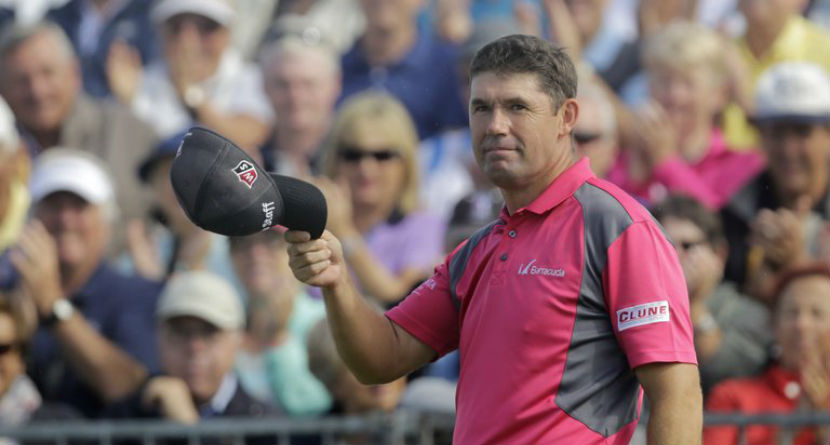 After so many close calls Sergio Garcia finally got his elusive first major on Sunday at Augusta, but that doesn’t change the past. One player who had a front row seat for two of them also happened to beat him both times. That player is Ireland’s Padraig Harrington. The first one was the 2007 Open Championship at Carnoustie where he topped him in a playoff. The other was the 2008 PGA Championship at Oakland Hills where Harrington edged him by two shots when he closed with a final round 66. Garcia shot 68!

Harrington was a guest on Ireland’s RTE 2fm program “Game On” and didn’t sugarcoat their rocky relationship. In fact, he went so far to say Garcia was a “sore loser.”

“His is a very flamboyant game, everything comes easy. There were periods he never practiced,” Harrington said. “I worked at it, grinded it out, got the best of it. I’m very strong with the etiquette of the game, so I don’t tolerate people spitting in the hole, throwing their shoes or throwing golf clubs. That would be my attitude, and that would be quite clear from where I came from.”

Harrington specifically called out the playoff 10 years ago at Carnoustie, where Garcia lipped out a 10-foot par putt to win on the 72nd hole. Harrington proceeded to claim his first of three major titles.

“I gave him every out I possibly could at the 2007 Open. I was as polite as I could, and as generous as I could be,” Harrington said. “But he was a very sore loser, and he continued to be a very sore loser. So clearly after that, we had a very sticky wicket I’d say. The Ryder Cup obviously improved it to no end. But look, we say hello to each other every day we meet, but it’s with gritted teeth, there’s no doubt about it.”

Harrington happened to be on-site at Augusta National working for Sky Sports, and he said he felt happy for Garcia’s major breakthrough despite their past.

“I was delighted to see the emotion on the 18th green,” he said. “Anybody watching that has got to feel for him and see, maybe I’m a bit harsh in the fact that I look at it and say, ‘Well, everything comes easy to Sergio.’ But clearly, it hasn’t come easy to him. It really hasn’t. And you could see in that moment in time that, you know, he probably paid his dues.”

Here is the interview in full. The juicy part doesn’t get going untill the 9:00 mark:

While we are on the subject of being happy for Sergio, here are some player reactions congratulating him on his major breakthrough.

2 unbelievable players and 2 great friends, but I couldn’t be happier for @TheSergioGarcia. You deserve it all amigo!!

Congrats @TheSergioGarcia
Incredible battle out there. Sport in the moment can be tough. But it’s just sport. Hope you guys enjoyed it. pic.twitter.com/er7OzrdTgA