Palmer Hilariously Mocks Spieth’s “Go Get That” At Zurich Classic 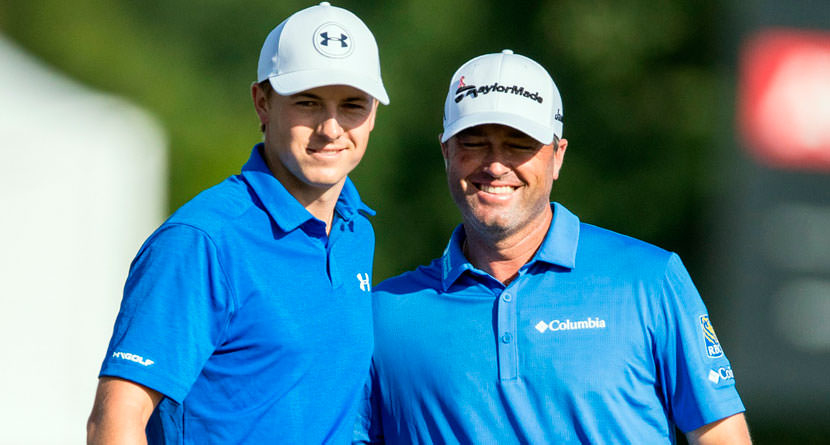 Jordan Spieth’s 2107 Open Championship win had a few memorable moments that will be replayed on highlight reels for years to come. Perhaps only second to his shot from the driving range on the 13th hole was Spieth’s long eagle putt a few holes later on the par-5 15th.

Unbelievable! @jordanspieth holes an eagle at the 15th. #TheOpen pic.twitter.com/DuRgow3ldg

While the putt was great and timely, it was Spieth’s “Go get that!” command to caddie Michael Greller that lives on in infamy. Fast forward some nine months to this week’s Zurich Classic of New Orleans, the PGA Tour’s lone sanctioned team event. Paired up with fellow Texan Ryan Palmer, Spieth got off to a rough start during Thursday’s Four-Ball round playing the first five holes of the day in 1-over par.

Luckily for Spieth, the best ball format allowed for Palmer to carry some of the weight in the early going. Plodding along at 1-under par, Palmer rolled in a 14-footer for birdie to move the team to 2-under. On his way to the cup, Palmer stopped suddenly, looked at his partner, pointed and said, “Go get that!”

Turns to @JordanSpieth and offers a familiar suggestion.

“Go get that.” ?#QuickHits pic.twitter.com/X5aOWtA7N4

Spieth and Palmer laughed off the homage and really got things going from there. Turning onto the front side of the golf course, the duo managed to shot a best-ball 4-under par 32 to move them to 6-under par for the round.

Other highlights included an albatross by Rob Oppenheim who holed his second shot on the par-5 7th hole from 262 yards out.

Rob Oppenheim holed out from 262 yards on No. 7 @Zurich_Classic. pic.twitter.com/3Ykbk1XbU2

One of the headlining pairings, Justin Rose and Henrik Stenson gave the viewers in New Orleans a free shot as Rose stripped down to his skivvies in hopes of getting up and down from the water for a par.

Pants are coming off in NOLA. pic.twitter.com/HfhKQc7gWV

All of those groups will enter Friday’s second round foursomes (alternate shot) six shots behind first-round co-leaders Chez Reavie and Lucas Glover and Xinjun Zhang and Zecheng Dou who posted a pair of 12-under par 60s.

The teams of Tony Finau and Daniel Summerhays, Tommy Fleetwood and Chris Paisley, J.J. Henry and Tom Hoge, Michael Kim and Andrew Putnam and Kevin Kisner and Scott Brown are all two shots back of the leaders after first rounds of 10-under par 62.