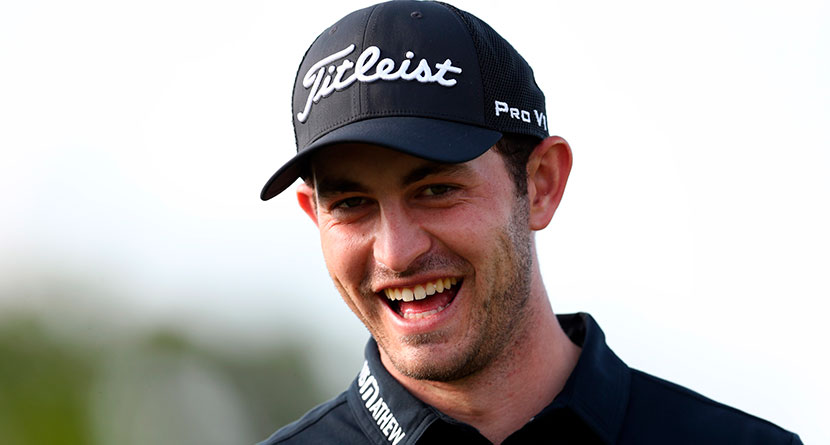 Watching Patrick Cantlay on the PGA Tour — or any other handful of players who don’t emote regularly — you can be forgiven for thinking he’s another robot who goes through the machinist motions of playing golf at the highest level.

However, we got a glimpse into a bit of Cantlay’s personality earlier this season at the Sentry Tournament of Champions when a hot mic picked up a conversation he was having on the 17th tee with playing partner Jon Rahm, and the pair’s caddies, Matt Minister and Adam Hayes.

After a nasty cell of weather blew threw the Plantation Course at Kapalua, Cantlay and Minister and Rahm and Hayes emerged from a holding pattern on the course to resume play on the 17th tee. As they were prepared to do so, Golf Channel came back from a commercial and caught Cantlay on a hot mic.


“He waited his whole life to be like… I’ve been waiting for this weather for 40 years,” Cantlay said as he teed up his ball. “These pampered f–ks need to play.”

While Cantlay likely received a fine from the Tour for the conversation being broadcast out to households around the country, the biggest question to emerge from the funny moment was what exactly was Cantlay talking about, and nearly four months later we got our answer directly from the horse’s mouth.

Cantlay joined the No Laying Up podcast for an all-encompassing conversation about the World No. 7’s journey to the PGA Tour, but before they wrapped the hour-long chat, host Chris Solomon asked about the hot mic moment and its background.

“It was on 17, and we were on the tee box a long time,” Cantlay explained. “It had been raining and we were in a hold. No one was around and I don’t even think I had my ball teed up at the time. (Jon Rahm and his caddie) were talking about the rain that we were having was similar to how it was in the (2019) British Open on Sunday.

“The British Open at Portrush on Sunday last year, it was pouring. The leaders had played in serious, serious rain and it was similar to that (at Kapalua), just a full-on downpour. And they were saying it was during one of the times when it was really pouring that a rules official came up to them and was like, ‘hey guys, you need to keep playing. You can’t hold for this; it’s just some rain.’

Patrick Cantlay joins the pod this week to discuss transitioning from amateur to pro golf, his brutal back injury, overcoming tragedy, Augusta, the Presidents Cup, and so much more.@patrick_cantlay

“I was adding to (Rahm’s) story lik that rules official has probably been waiting his whole life to tell some of these spoiled brat Tour pros to hurry up and play and that was his moment in the British Open on Sunday to get up in your ear and be like, ‘hey guys, get going.’

“I had no idea obviously that was going to be on camera and mic’d up. That’s my fault, and I have to be better about that. It made for a funny moment.”

And as for the aftermath, Cantlay gave a little more context to his mai tai conversation with longtime caddie Minister (aka Rev).

“After all that rain, and waiting there forever and it being a long day, Kapalua feels like a walk that’s entirely uphill,” Cantlay explained. “And with all the rain and the winds, I was just making a joke to my caddie before hitting my tee shot like, ‘we’re going to need to get a drink after this. You’re going to need a mai tai after carrying this bag up this mountain all day.

“I don’t really drink during tournament weeks, so my caddie, I told him, ‘we got two more holes and we can go get a mai tai, Revvy’ and he said, ‘I’ll have a mai tai, you can have a water.'”

The entire interview is great as Cantlay gives lengthy, candid and interesting responses about his amateur career, playing on the Presidents Cup team and nearly winning the Masters in 2019. You can listen to the full interview here.