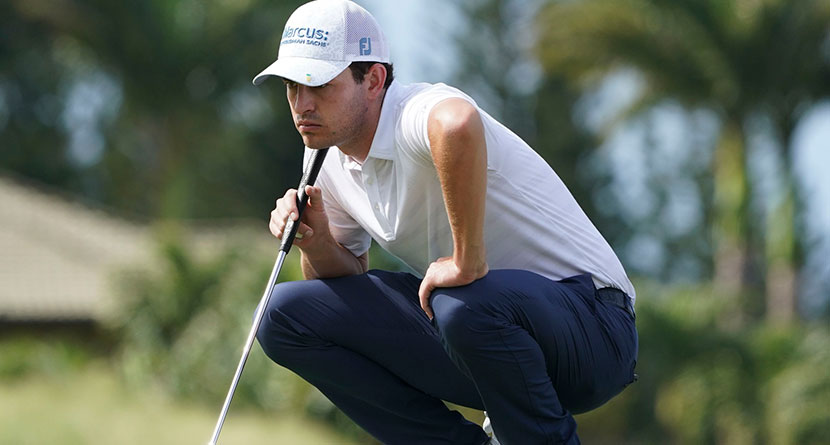 The weather forecast for the weekend at the Plantation Course at Kapalua called for high winds and squalls of rain moving in and out that would not only test the games of best players in the world, but also their temperament.

Even as the weather forecast proved correct, the winners-only no-cut event still had a relatively laid-back vibe as players cleaned mud splatter from their clothing, hid behind umbrellas and changed in and out of their weather gear.

As a particularly nasty cell blew through late in the second round, Patrick Cantlay and Jon Rahm emerged from the worst of it to stand on the 17th tee when the Golf Channel broadcast returned from commercial.


With the on-course mics open, Cantlay was caught mid-sentence in what appeared to be a relaying of a conversation he was part of earlier in the day.

“He waited his whole life to be like… I’ve been waiting for this weather for 40 years,” Cantlay said as he teed up his ball. “These pampered f–ks need to play.”

Then in a moment that was reminiscent of former New York Jets head coach Rex Ryan talking about getting a snack, Cantlay said to his caddie, “Alright, two more holes and we can get a mai tai.”

“Gosh, he’s not really staying in the moment,” Golf Channel analyst Paul Azinger said. “He’s already in the 19th hole in his head.”

“Talk about unfiltered,” Dan Hicks added. “They do have to realize that there are live mics around, especially when you’re turning into a star player like Cantlay is.”

The biggest question to emerge from the hot mic wasn’t whether or not Cantlay would get in trouble for it — he’ll most certainly be receiving a strongly-worded letter from Tour HQ for “conduct unbecoming a professional” — but who originally said the line he was relaying?

Ryan Palmer, at 43 years old, is the oldest player in the field, so he wouldn’t fit into the “waiting 40 years” for the brutal weather. Perhaps a caddie? But why would a caddie, who gets hit with the brunt of the bad weather, want anything other than sunshine and a cool breeze on a brutally challenging walking course?

That’s why Mark Rolfing, the unofficial PGA Tour liaison to Hawaii and 40-year Maui resident, became the speculative front-runner for the original quote.

So, who was Cantlay talking about? No one has been waiting for 40 years for this kind of weather that’s in the field.

What about *40-year Maui resident* Mark Rolfing who was saying earlier in the broadcast he was in player dining pre-round chatting up the guys? ?

It also would stand to reason that Rolfing would be critical — tongue-in-cheek or not — of top players like Tiger Woods, Brooks Koepka, Rory McIlroy and Phil Mickelson opting to skip the event.

For what it’s worth, Cantlay’s caddie, Mike Minister, denied that Rolfing was involved.

“I know that Rolfing had nothing to do with that conversation,” Minister told Golf.com via text message. “I find it amusing people assuming they know what we are talking about. They are wrong.”

Minister said he wouldn’t disclose any other information about the conversation.

Regardless, Cantlay didn’t speak about the hot mic after the round, and there likely won’t be much made of it other than a rank-and-file apology for those offended by the language.

His slip did seem to make him more fans on social media, and his solid play has him three shots back of 36-hole leader Xander Schauffele as more difficult weather is forecasted for the weekend at Kapalua.