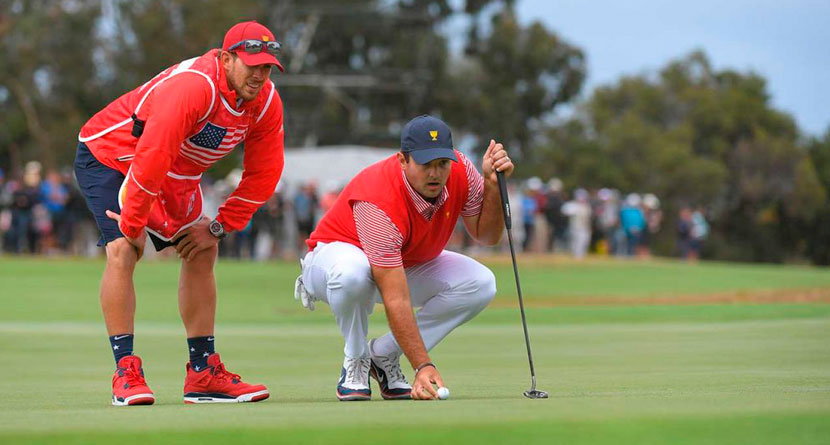 His caddie and brother-in-law, Kessler Karain, was involved in an altercation with a fan that resulted in Karain leaving the golf cart he was riding in, confronting the fan and shoving him.

Reed, who has been enduring heckling from the Australian fans throughout the week largely stemming from his controversial rules infraction at the Hero World Challenge a week earlier, failed to secure even a half-point for the American side through three sessions of team golf. Alongside Webb Simpson for two fourball and one foursomes match, the U.S. duo was thoroughly handled by the Internationals.


Following their Saturday’s fourball match, which they lost to C.T. Pan and Hideki Matsuyama 5 & 3, Reed and Karain were driving back to the clubhouse from the 15th green when one fan, in particular, got a little too close to Reed, according to a statement released by Karain.

The biggest news station in Australia used our official statement from Patrick Reed’s caddie in their segment about the physical altercation at the #PresidentsCup pic.twitter.com/2SbXmuMNox

“As a caddie, one of your jobs is to protect your player. And unlike several other sports, in golf fans can get pretty close to athletes,” Karain said as part of his statement released to Barstool Sports and ESPN.com. “We have been known for having fun with some good banter, but after hearing several fans in Australia for 3 days some had taken it too far, I had enough. And this gentleman was one of them.  Riding on the cart, guy was about 3 feet from Patrick and said, “you f**king suck.”

“I got off the cart and shoved him, said a couple things, probably a few expletives. Security came and I got back in [the] cart and left. I don’t think there’s one caddie I know that could blame me.

“Unless his bones break like Mr. Glass, the most harm done was a little spilled beer, which I’m more than happy to reimburse him for.”

Looks like this video is towards the end of Patrick Reed’s caddie and fan altercation. pic.twitter.com/UY11SmFwlF

The PGA Tour launched an investigation into the incident and concluded that Karain would be suspended from the grounds for Sunday’s singles matches.

“Following an incident that took place on Saturday at the Presidents Cup involving Kessler Karain and a spectator, Karain will not return to caddie for Sunday’s final-round singles matches,” the Tour said in a statement. “We will have no further comment at this time,”

“I respect the Tour’s decision,” Reed said in a statement on Saturday night. “We are all focused on winning the Presidents Cup tomorrow.”

And that’s exactly what the United States did with the help of Reed who had his swing coach, Kevin Kirk, on the bag in the place of his brother-in-law. Reed secured one of the first points for the U.S., making seemingly everything he looked at over the first seven holes against C.T. Pan.

“When you make birdies, you don’t hear much,” Reed said of his fan interactions on Sunday. “I knew I had a good support team with security and officers and volunteers; I think they did a great job today.

“The first couple days, when you’re down in your matches early, the fans get very loud and very confident. But if you do the opposite and go out and start winning early, it silences them pretty quickly.”