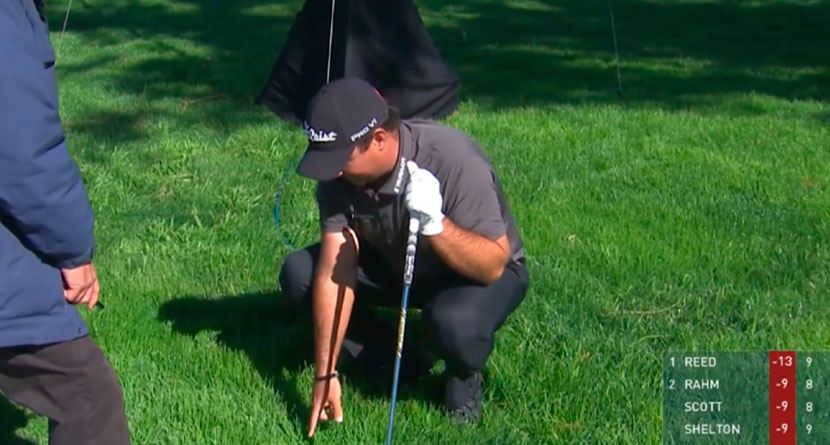 Patrick Reed found himself at the center of yet another rules controversy on Saturday at the Farmers Insurance Open en route to a third-round 2-under par 70 that tied him with Carlos Ortiz for the 54-hole lead.

Reed fired a blemish-free front nine 5-under par 31 to jump into the lead, but his round unraveled on the back nine following a poor second shot from a fairway bunker.

Reed’s approach into the 10th hole at Torrey Pines South Course went well left of the target, leaving him some 47 yards from the pin. Unable to see his ball come down, Reed investigated a particularly deep lie in the rough questioning whether or not the ball may have embedded.

Reed proceeded to mark his ball and pick it up before replacing it and calling for a rules official. The PGA Tour tweeted out a video of the full incident.

The full exchange as Patrick Reed takes embedded ball relief on No. 10. pic.twitter.com/gSPH6PrAoW

With a nearby volunteer marking the ball and telling him she didn’t see the ball bounce, Reed went into investigative mode, alerting his playing partners and calling for a rules official. Reed removed his ball and placed it a few yards away to avoid a possible mistake by cleaning a ball that hadn’t officially been deemed embedded.

As CBS’ Jim Nantz and Nick Faldo spoke with rules official Ken Tackett about the situation, another official, Brad Fabel, came to Reed’s aid and upon feeling the area where the ball was, declared that it had broken ground.

Nantz, Faldo and analyst Frank Nobilio questioned Reed’s picking up of the ball prior to the official arriving, but none appeared to have any strong disagreements with the ruling at the onset. However, upon further review of the video, there was clear evidence that the ball had bounced once, about knee-height, before coming to rest, bringing into question whether the ball had actually embedded.

Reed shot a back-nine 3-over par 39 to come back to the pack, but after the round, the main sticking point was the ruling from the 10th hole. Reed spoke to CBS’ Amanda Balionis after the round.

Co-leader Patrick Reed recaps his third round, including the 10th hole ruling. pic.twitter.com/lgv82A2hlv

Once the additional views came to the surface, the questions really began to fly. Nantz and Faldo again spoke to Tackett about the ruling following Reed’s on-air explanation.

Tackett backed up the ruling made by Fabel based on the information available at the time despite skepticism from Nantz and Faldo.

Patrick Reed gives a full walk-through of his situation on No. 10. pic.twitter.com/2crxsKFLzC

“When the ball bounces it’s almost impossible for it to break the plane and so therefore, when that happens, anytime you see the ball bounce you just play it as it lies,” Reed told the media after the round. “If you had 100 people around there, bunch of fans out there and one fan said they saw it bounce, I never would have had to put a tee down and even check to see if it was embedded.

“That’s why you always call a rules official, because at the end of the day they’re going to have the best judgment over everybody. If they believe that it’s embedded as well, that’s then when you go by what they say.”

Reed confirmed even after seeing video that he still felt he did everything correctly and he was at peace with how he went about getting a free drop.

“I feel fine, I feel great,” he said. “I did everything I was supposed to do.”