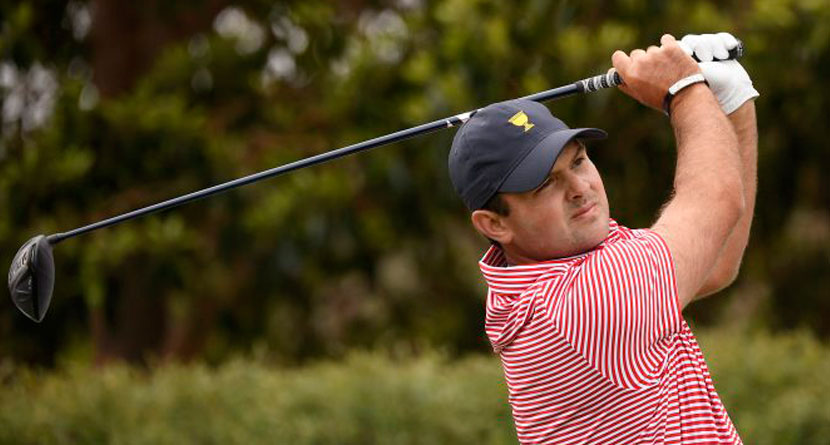 International Presidents Cup teammates and Australian Tour pros Marc Leishman and Cam Smith said earlier in the week that Patrick Reed had given the Aussie fans plenty of ammo with his controversial rules infraction at the Hero World Challenge, and it only took until the first tee on Thursday at Royal Melbourne to be proved correct.

While much of the build-up throughout the week centered around Reed’s waste bunker penalty, fans waited until he and partner Webb Simpson were on the first tee to unleash their best barbs.

A smattering of boos accompanied Reed and Simpson’s introduction, but once Reed began to prepare to hit his opening tee shots, the flood gates opened.


“Are you going to improve your lie on the tee, mate?” one fan said to some laughter.

“Patrick, you’re really going to make your caddie carry 14 clubs and a shovel?” another piped up as things quieted down.

After hitting his drive, another fan yelled, “Get in the bunker!” which it did to applause from the home fans. Reed was unable to get up-and-down for birdie, halving the first hole with their International competitors, Hideki Matsuyama and C.T. Pan.

Can’t make this up: Patrick Reed hits his opening drive into the bunker. Crowd erupts in cheers. “Patrick, there’s cameras over there too.”

“It’s exactly what I expected,” Reed said of the fan interactions.

Reed and Simpson lost back-to-back holes on Nos. 3 and 4, but were able to claw back to all square thanks to a Reed birdie on the 16th.

Pan responded with a 27-footer of his own for birdie on the next hole, which was enough to give the Internationals a 1-up advantage that they would maintain through the final green to win the match.

The United States finished the first day of play down 4-1, the lone point coming from the team of playing captain Tiger Woods and Justin Thomas.

Reed and Simpson will be back out on Friday in foursomes playing against Abraham Ancer and Marc Leishman in the third group off.