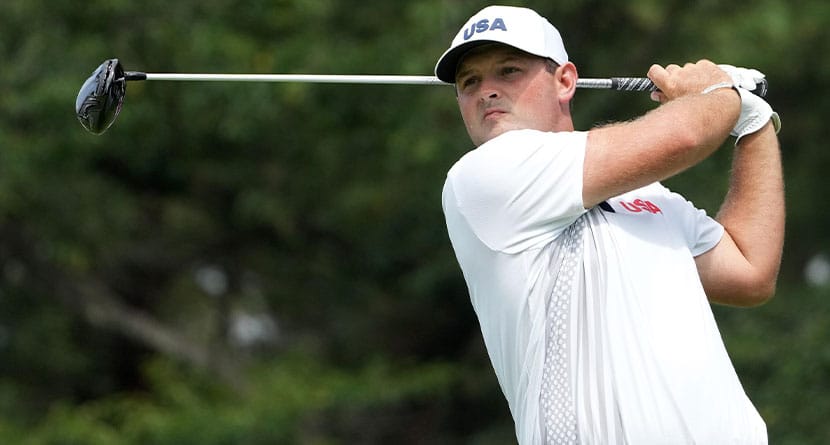 While some of the best players in the world jockey for position (and payouts) in the FedEx Cup Playoffs and Ryder Cup standings, one familiar face has been noticeably absent over the past two weeks: Patrick Reed.

Originally dealing with an ankle injury that stemmed from a slip and fall at the WGC-FedEx St. Jude Invitational, Reed withdrew from the regular season-ending Wyndham Championship and then from the first leg of the Playoffs at The Northern Trust.

While many were under the assumption that it was the ankle injury that prevented Reed, No. 22 in the season-long standings entering the Playoffs, from teeing it up at Liberty National, as the weekend wore on reports surfaced that Reed was dealing with something more serious than an ankle injury.

“I’ve been in the hospital with bilateral pneumonia. I’m on the road to recovery and once I’m cleared from the doctors, I look forward to returning,” Reed told Golf Channel’s Todd Lewis in a statement. “The good news is my ankle is okay.”

.@PReedGolf has been in a Houston area hospital since Friday morning after being diagnosed with bilateral pneumonia. Reed is improving and hopes to be released soon. He will not play the @BMWchamps this week. Below is a statement from Patrick Reed. More details on @GolfCentral. pic.twitter.com/AXXdH5har2

“Patrick is still in the hospital, but he’s doing much better,” Justine said. “It was very scary the last few days, and right now, we don’t have a timeline on his recovery. I never count him out, but I do know he will not be able to play (the BMW Championship this week).

“We are just taking it one day at a time. We are following all of the doctors’ orders and you can sure bet as soon as they give him the go-ahead to play, he will.”

We are all wishing @PReedGolf the best as he is battling double pneumonia in a hospital in Houston. Justine was kind enough to give us an update and I wanted to share it here: pic.twitter.com/yZpJXwcpcS

Both Patrick and Justine thanked fans for their support as well as publicly thanking the doctors, nurses and staff at The Methodist Hospital at the Texas Medical Center in Houston.

Missing the first playoff event, Reed dropped from 22nd to 26th in the FedEx Cup Standings, and he will probably fall outside of the top-30 this week, meaning his PGA Tour season will likely come to an end without him playing in a single Playoff event.

Further cast into doubt is Reed’s inclusion on the United States Ryder Cup team, which will kick off in one month’s time at Whistling Straits in Kohler, Wisconsin.

Reed has fallen to 10th on the U.S. points list with only the top-6 automatically qualifying, meaning he’d require a captain’s pick from Steve Stricker to make the team. Stricker will make those picks on September 8, following the completion of the Tour Championship.

Reed has played on the last three U.S. Ryder Cup teams as well as the last three Presidents Cup teams, but controversy has surrounded him in the team competitions, culminating with his public calling out of captain Jim Furyk two years ago in Paris.