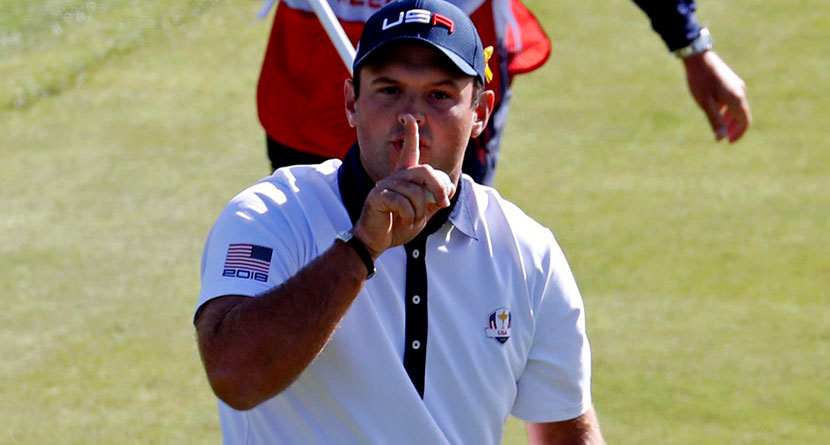 Patrick Reed has heard just about enough out of Golf Channel analyst Brandel Chamblee, and he’s even taken legal measure to attempt to silence the Tour player-turned-talking head, according to a report from Golfweek.com’s Eamon Lynch.

Lynch reported that following last month’s Hero World Challenge in which Reed was caught on camera removing sand from behind his ball in a waste bunker at Albany Golf Club resulting in a two-shot penalty for improving his lie, Chamblee’s subsequent comments “have caused, and continue to cause, Mr. Reed significant emotional, reputational and pecuniary harm,” Reed’s lawyer, Peter Ginsberg, wrote in a cease and desist letter sent to Chamblee.

The backstory is that following Reed’s two-stroke penalty and subsequent firestorm, Chamblee went on Golf Channel’s Live From The Presidents Cup on Monday, Dec. 9 and commented on the situation.


“To defend what Patrick Reed did is defending cheating. It’s defending breaking the rules,” Chamblee said. “This was flagrant. No way, no camera angle you could look at. Anybody in the world of golf who watched this, it was repugnant video to anybody in the world of golf…. As far back as this game goes, at its inception, is that you do not improve your lie. It’s not a new rule. It’s been a long time, I don’t care what camera angle, he will have known he’s improving his lie.”

“The purpose of this letter is to obtain assurance that you will refrain from any further dissemination, publication or republication of false and defamatory statements concerning Mr. Reed, including any allegations that he ‘cheated’ at the Hero World Challenge in the Bahamas,” Ginsberg, a partner at the New York City law firm of Sullivan & Worcester, wrote.

“Indeed, as you should know, and presumably do know but chose to ignore, if the PGA Tour believed that Mr. Reed had intentionally violated any rule, he would have been disqualified from the tournament rather than assessed a two-stroke penalty,” Ginsberg continued. “Everyone involved agrees that Mr. Reed acted unintentionally, and the tape of the incident fully supports that conclusion.”

Chamblee’s response to the whole ordeal was flippant disregard.

“My first reaction was that someone is so pissed at Patrick Reed that they went back and watched all the nice things I said about him when he won the Masters and was demanding I cease and desist saying nice things,” Chamblee told Lynch. “As I read further and got to the sentence that the tape fully supported him, I wondered how did Patrick Reed find the only lawyer in the world who didn’t play golf?”

Requesting Chamblee’s signature on a document that stated he would not repeat comments about Reed’s alleged cheating.

“As a professional golfer in a sport built on relationships and reputation, your broadcasts are incredibly damaging and have caused, and continue to cause, Mr. Reed significant emotional, reputational and pecuniary harm,” Ginsberg wrote. “Mr. Reed is prepared to accept your affirmative representations that you will comply with his demand that you desist from disseminating, publishing or republishing false and defamatory statements concerning Mr. Reed.”

That signature does not appear to be forthcoming from Chamblee.

“My job is to be accurate in my analysis and I weigh my words heavily,” Chamblee told Golfweek.com. “Nothing I said on the air did I say flippantly. I thought about how exactly to say it to get closer to the larger point about the traditions of the game. That’s the origin of my remarks. They had no malice. They were meant to be accurate and admonishing about the decay of the traditions of the game. Instead of self-policing, it’s catch-me-if-you-can. And that bothers me.”

Lynch consulted legal opinions for the ordeal, speaking to Jodi Balsam, a professor of sports law at Brooklyn Law School. Balsam said that Chamblee has nothing to worry about as it pertains to a potential defamation lawsuit.

“The attempt by Reed’s lawyer to silence public discourse about his client’s tournament conduct is outrageous and not legally supportable,” she said. “As a public figure, and especially as an athlete, Reed assumes the risk of frank and even censorious commentary about his performance and admitted rule-breaking. Nothing Brandel Chamblee said amounts to a false statement of fact, but falls within his well-established and absolute right to express an opinion.”

According to Lynch, a Golf Channel spokesman told him that “the network fully supports Chamblee and values his opinions,” so don’t expect them to be silenced any time soon.