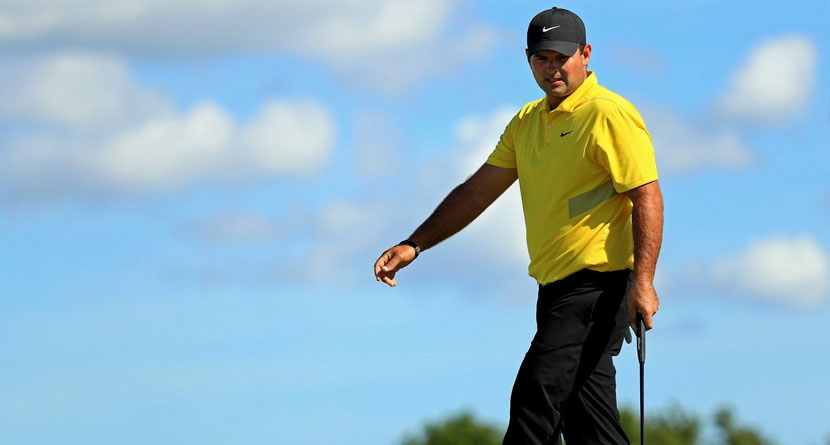 A low-key Friday afternoon in December isn’t the time you’d expect a rules fiasco to ignite the golf world, but when the perpetrator is Patrick Reed, people tend to get riled up.

Playing his third round at the 18-man Hero World Challenge at Albany Golf Club in the Bahamas on Friday, Reed found himself in a waste bunker on the par-5 11th hole.

Leading the tournament at the time, Reed’s second shot came to rest in a footprint in the sand, and as he prepared to hit his third shot, cameras showed Reed placing his club behind the ball and removing sand with his practice swing.

While Reed would go on to bogey the hole, that 6 would turn into an 8 after Reed was shown the video footage of him breaking Rule 8.1a(4), which prohibits players from improving conditions that affect your stroke.

“You could see, the club did get behind the ball closer and then when he took it away, you could see the path of the sand come away in two different occasions,” Slugger White, PGA Tour’s vice president of rules and competitions, said. “He did it the first time and he put the club down again and he did it another time, but that’s irrelevant. It doesn’t make any difference.”

Reed accepted the penalty after seeing the video, but hedged his comments by saying the camera angle didn’t do him any favors.

“I accept (the penalty),” Reed said. “It wasn’t because of any intent. I felt like I was far enough away, but because of what we saw… I was far enough away from the golf ball because when I take my practice swings anyways, I don’t ever put the club directly behind the ball because I’m always scared of the ball moving. I’m always going to give myself some room, especially on practice swings. After seeing that camera angle, because it brushed the sand, it’s a penalty. It is a big part, intent, but at the same time, when you only have one camera angle, that’s all you can go off of.

Reed ended up shooting a 2-over par 74 with the penalty, which moved him from one shot back of 54-hole leader Gary Woodland to three shots back.

A Sunday 66 by Reed, his third 6-under par round of the tournament, was enough to move him into solo third place for the week, but the penalty loomed large as he ended the event two strokes behind eventual champion Henrik Stenson.