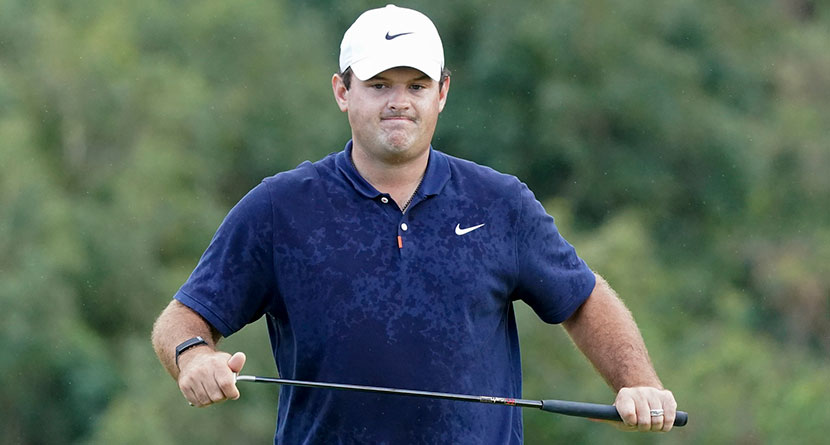 Patrick Reed’s return the United States this week at the Sentry Tournament of Champions had an ugly finish for Reed, and not only because he failed to capitalize on opportunities to win the golf tournament.

Having put together one of the best putting weeks in the history of the PGA Tour — he picked up over nine strokes on the field average and had 45 one-putts over the 72-hole tournament — the lasting memory on the greens for most fans will be Reed’s bid for birdie on the third playoff hole.

Faced with a 12-footer for birdie that would have forced Justin Thomas to make his birdie putt to match, Reed stroked the putt and shortly after a fan loudly and clearly screamed, “CHEATER!” as the ball slipped past the right side of the cup.

“That was pretty unfortunate,” Golf Channel announcer Dan Hicks said. “You see Reed glaring up into the stands. Someone yelled as loud and as clear as day, ‘Cheater!'”

The missed putt would turn out to cost Reed a chance to head to a fourth playoff hole as Thomas birdied the par-5 18th in his fourth playing of the 677-yard closer to capture his 12th PGA Tour victory before the age of 27.

As for Reed, speaking with Golf Channel after the round, he didn’t mention the heckle.

“It’s all about winning,” Reed said, asked if his 7-under par day and giving himself a chance was good enough. “At the end of the day, I did what I had to do today, I mean, I went out and had to go shoot a low number – especially with how windy it was today – to give myself an opportunity, and I did. Unfortunately, I had two putts to close it, and one of them I got gusted on and this last one, with the wind and the break, it got me again.”

On Golf Central after the tournament, Notah Begay and Brandel Chamblee discussed what is sure to be a taxing year for Reed with fans already heckling him at a relatively low-key, winners-only event on Maui.

“It’s something that he’s going to have to deal with,” Begay III said. “I don’t think we’ll ever get to that point [of Reed apologizing]. I don’t think Patrick Reed sees it in the same light as a lot of people, and I think he’s going to stick with the decision that he’s made up to this point and do his best to move on.”

Reed is in the field again next week at the Sony Open in Hawaii, the first full-field event of 2020, at Waialae Country Club in Honolulu.