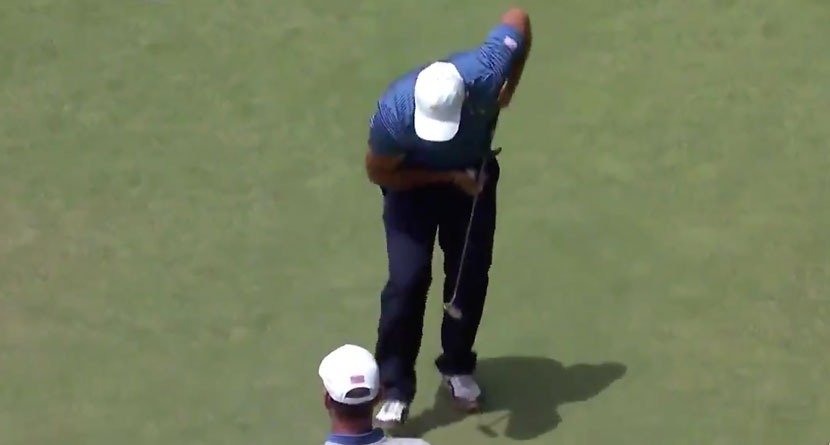 Patrick Reed’s sordid Presidents Cup continued on Friday at Royal Melbourne as the 2018 Masters champion failed to put a point on the board for the United States team for the second consecutive session.

Following an opening-day match that saw Reed roundly heckled on the first tee, an emboldened fan base, which was bolstered by the International Team’s 4-1 first session victory, continued to give Reed a hard time as he played alongside Webb Simpson for the second day in a row.

Facing off against Abraham Ancer and Marc Leishman, the Americans won the first hole of the day, gave it right back on the second and never led the rest of the match. Making the turn one down, the Americans dropped the 10th as well.


Playing the par-4 11th, Reed needed to make a 10-foot birdie putt to avoid dropping another hole with the Internationals in close. As soon as Reed struck his putt, a fan yelled out, “Miss!”

He didn’t, but what he did next was puzzling.

Using his putter as a prop, Reed picked his ball out of the hole and proceeded to make two faux-shoveling motions, an obvious callback to his controversial penalty at last week’s Hero World Challenge, which has brought he and his teammates a fair bit of distraction this week.

Despite claims that the rules infraction was nothing more than a breach of the rules with no ill intent, and “in the past” as Reed and the American team had moved their focus to this week, the shovel celebration was perplexing.

Takes a very twisted mindset to do what Patrick Reed did, get caught, and then think of it as proof that everyone is out to get you. pic.twitter.com/cPH2coUGdj

Reed and Simpson would go on to lose their match 3 & 2.