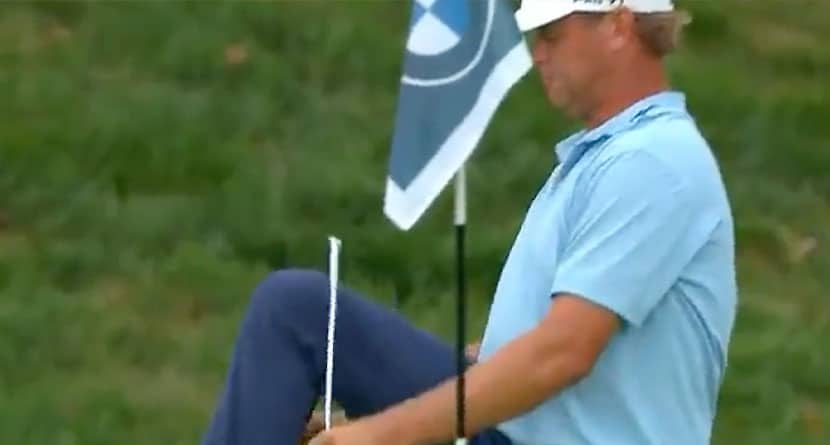 Entering the BMW Championship ranked No. 66 in the FedEx Cup Standings, Patton Kizzire knew he needed an exceptional week at Caves Valley if he was going to advance to East Lake and the Tour Championship.

An opening-round of 3-under par 69 was slightly better than the field average on a soft and receptive golf course, but failing to go low on Friday had Kizzire running hot as he came to the home hole.

At just 2-under par for the day and 5-under par for the tournament, Kizzire could see on a nearby leaderboard that he was 11 shots back of the leader, Bryson DeChambeau, who had just blitzed the very same course to the tune of a 12-under par 60, missing a 6-foot birdie putt for a 59.

So when Kizzire found the water right of the 18th green and failed to get up-and-down to save bogey, the 6-foot-5 Auburn product let off some steam in a big way, snapping his putter over his knee and attempting to rip up his hat as he made his way to the clubhouse.

“It does boil up in you, Zing, and when things happen, you’re trying to vent somehow, someway,” announcer Dan Hicks said to analyst Paul Azinger.

“That’s how we all feel,” Paul Azinger replied. “We feel like that every time what just happened to him happens. That’s how you feel on the inside. Whenever a guy doesn’t act like that, he’s in control.”

The double bogey erased Kizzire’s work to the good on a day when only five players of the 69-man field shot over par.

Interestingly, this is the second week in a row Kizzire laid waste to one of his clubs. Last week at Liberty National during The Northern Trust, Kizzire used his back to snap his driver after a wayward drive.

Kizzire did wrap up his week in Maryland with a pair of 68s to finish in a tie for 34th place, but it was far from enough to get him into the Tour Championship. He will now have a few weeks off before the start of the 2021-22 wraparound season, which kicks off with the Fortinet Championship — formerly the Safeway Open — on Sept. 16.