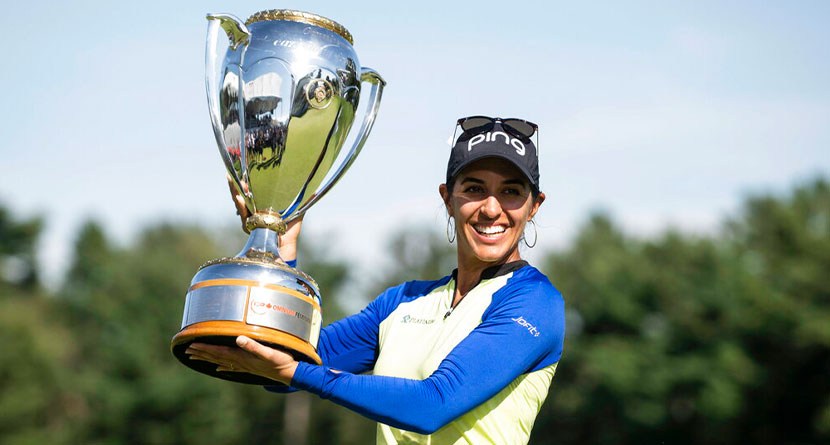 OTTAWA, Ontario (AP) — Paula Reto won the Canadian Pacific Women’s Open on Sunday for her first LPGA Tour victory, closing with a 4-under 67 for a one-stroke victory over Nelly Korda and Hye-Jin Choi.

“I’m really, really excited and just proud of myself for being able to stick through the shots and the routines,” Reto said. “Sometimes, I find that’s really hard to do, especially if you know you have only a few holes left.”

Reto finished at 19-under 265 at Ottawa Hunt and Golf Club. The 32-year-old South African opened with a course-record 62.

“I was trying not to watch the leaderboard,” said Reto, who played in the final group with Choi and Narin An. “I sort of knew where the girls in my group were, so I was just trying to make sure I stayed with them or maybe one or two ahead. That was the only thing I could control. You can’t do too much.”

Korda missed a chance to reclaim the No. 1 ranking, also shooting a 67.

“I think I had a decent shot at it,” Korda said. “I played good golf, and honestly, I’m just grateful that I am playing golf and I’m out here, and I’m enjoying every second of it.”

Choi, tied for the third-round lead with fellow South Korean rookie An, had a 69.

Three-time champion Lydia Ko had a 63 to finish fourth at 17 under.

Alena Sharp was the top Canadian, shooting a 67 to tie for 17th at 10 under. Canadian star Brooke Henderson tied for 49th at 5 under after a 69 in front of a large gallery.

“It was amazing,” Henderson said about the fans . “I didn’t necessarily expect that because I was thinking, you know, they should go and see some really good golf happening. It’s amazing that they were out there the whole time, just so many people. I felt the love all week.”

Golf Canada said an event-record 75,000 fans attended the event during the week.