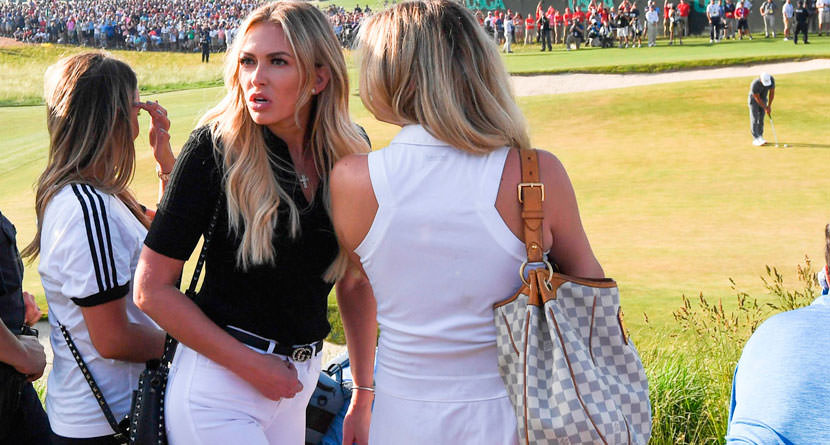 It can be tough to follow along with all the goings-on of a golf tournament when you’re on the ground. Unlike the other major sports, at a golf tournament, there are 18 different fields of play and upwards of 20 or 30 players who have a chance at winning any given week.

On Sunday at the U.S. Open, the event turned into a relative three-horse race over the final two holes with Brooks Koepka holding a four-shot lead over playing partner Dustin Johnson and a two-shot lead over the already-finished Tommy Fleetwood. Scoreboards around the 18th green displayed those facts.

Those facts, however, were apparently not known by Johnson’s fiancée, Paulina Gretzky, who along with two friends ducked under the ropes behind the 18th green to celebrate DJ’s second major championship victory.

As NJ.com’s Matt Stypulkoski detailed, just feet from the actual eventual champion’s father, Gretzky and her friends celebrated Johnson’s 13-foot birdie putt to clinch a solo third-place finish as if he had just won the U.S. Open.

They stood while Bob Koepka sat, anxiously swallowing his nerves in the knee-high fescue.

The three women were less careful with their excitement. When Johnson’s putt toppled into the hole, the trio erupted in euphorics – hugging, screaming, arms flailing.

After all, Johnson had just taken … solo third.

Then, just as Brooks Koepka prepared to tap in for bogey – and secure his second straight U.S. Open title – came the words.

Which of the three women said those words wasn’t quite clear. But one thing was -the supermodel celebutante and her friends had no clue that Johnson, the tournament’s 36-hole leader, had actually lost by two.

A few seconds later, though, the realization sunk in. Just as the final putt dropped and Bob Koepka stood there triumphantly, arms over head like Muhammad Ali, came the disappointed follow up.

Johnson and Gretzky will have to wait at least another month before they can possibly celebrate DJ’s second major win when he heads to Carnoustie for the Open Championship.

After that, the PGA Championship will be contested at Bellerive outside of St. Louis.