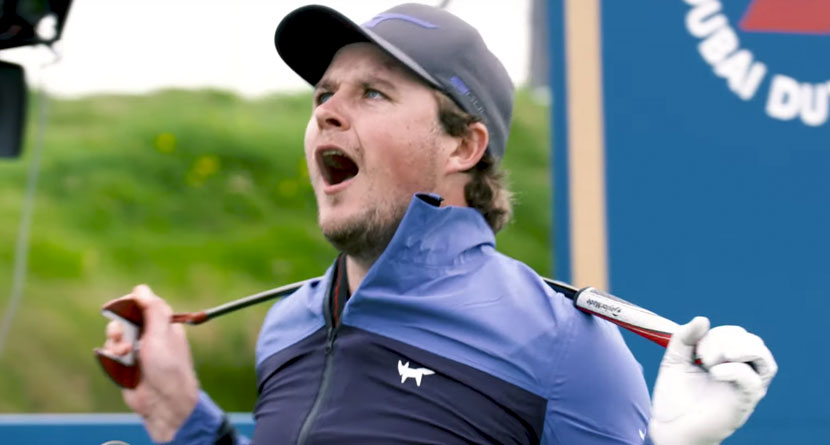 The name of the game is to hit as many clubs as you can — from putter to driver — onto the green, with one catch: once one player uses a club, then the other can’t, which takes the shotmaking to an absolutely elite level.

Playing the 152-yard par-3 eighth hole at Lahinch, Pepperell and Fox knocked out the usual suspects first — gap wedge through 6-iron — and that’s when the fun really started.

Pepperell was able to carve in a 4-iron to take a 4-3 lead, but Fox answered with a cheeky 2-iron of his own that found the putting surface. A 3-iron from Pepperell nearly holed out, and Fox’s softest driver ever went running through the green.

Faced with either playing a lob wedge or a putter, Pepperell opted for the flatstick, which hopped a pot bunker and used the cambers of the surrounds to find the green.

The sixth green in regulation out of seven tries was enough to guarantee Pepperell the victory, but his putter was snapped in half in the celebration.

Not to be outdone, Fox smashed a lob wedge onto the middle of the green to result in a respectable 6-5 loss.

Pepperell was able to get his putter shaft fixed, and it’s been working well for him through two rounds in Ireland. The 28-year-old sits in second place through 36 holes at 8-under par, one shot back of Zander Lombard.