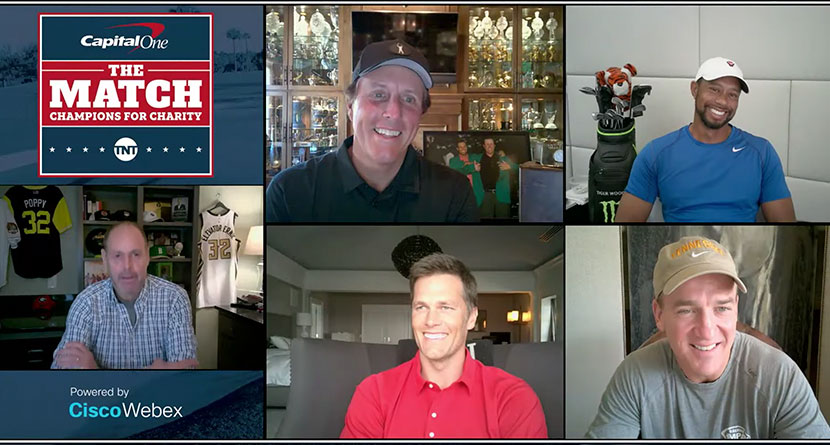 In a well-executed news dump on Thursday, Turner Sports announced the official information for The Match: Champions for Charity, the two-on-two competition that will pit Tiger Woods and Peyton Manning against Phil Mickelson and Tom Brady.

Corroborating previous reports, the match, which is sponsored by Capital One, is set to take place on May 24, the Sunday of Memorial Day Weekend, at Medalist Golf Club in Hobe Sound, Florida. The contest will begin at 2 p.m. and simulcast exclusively on TNT, TBS, truTV and HLN with pre-match coverage available within the Bleacher Report app.

“Associated with the live telecast, WarnerMedia and the golfers will collectively make a charitable donation of $10 million to benefit COVID-19 relief,” the statement read. “As part of the fundraising efforts, the competition will also include a partnership with the ALL IN Challenge, along with additional on-course competitive challenges for charity.”

While getting the particulars ironed out was nice, the true entertainment came in the form of a live video chat with the four competitors hosted by Turner Sports’ Ernie Johnson. Similar to his role on the Emmy Award-winning Inside The NBA, Johnson set up Mickelson, Woods, Brady and Manning to steal the show, and they delivered.

Tiger-Phil with Manning and Bradey set for May 24 at Medalist… $10-million pledged by the four participants for COVID-19 relief. Best-ball for 9 holes, followed by modified alternate shot.

There’s something to be said about contrived trash talk, but given the four personalities at play with this latest endeavor are pros. Brady started by taking a dig at Manning’s father, Archie, making a passing reference to Eli Manning’s draft-day trade demands before his teammate Mickelson showed off his staged video setup that included a picture of Woods donning Mickelson with the green jacket in 2005 while rehashing his victory at the original Match.

Phil came out talking trash, but Tiger had the green jacket ready ?

It’s @TigerWoods & Peyton vs. @PhilMickelson & @TomBrady ? Capital One’s The Match is on May 24 at Tiger’s course, The Medalist, only on TNT. Full interview in the B/R app https://t.co/99p5H7EB4W pic.twitter.com/5BJkMzl9dT

From there, Woods took the torch and burned Mickelson by using his 2019 green jacket as a blanket. The ribbing crescendoed, however, when Manning got to talking.

Speaking about the host course, Manning told a story of playing with Woods a few years back before launching into a great roast of Brady, referencing the new Tampa Bay quarterback’s accidental breaking and entering debacle last month.

The entire stream, which goes over 20 minutes in length, is worth the watch. See it below.