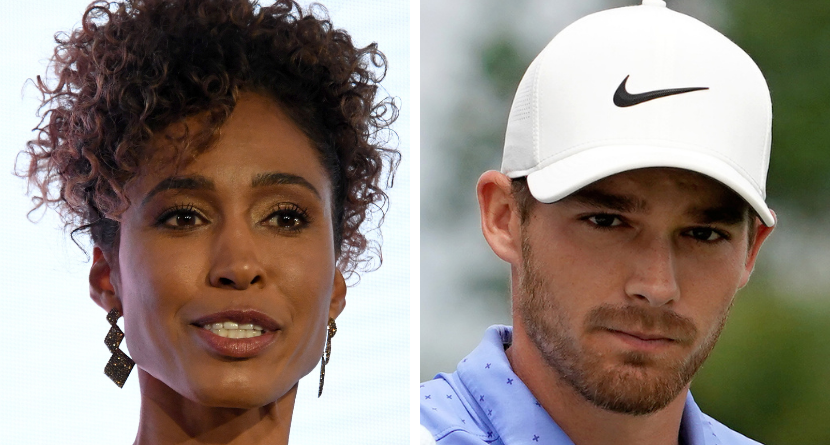 Twice during the PGA Championship we were reminded that golf balls are dangerous projectiles, particularly when struck by professionals who are capable of generating blistering velocity. And the danger is present inside and outside the ropes.

The first incident occurred on Thursday, when ESPN SportsCenter anchor Sage Steele — who was on-site taping live editions of the network’s flagship show — was struck in the face by an errant Jon Rahm tee shot. Then, during Friday’s round, Aaron Wise was hit in the head by a Cam Smith drive while standing in an adjacent fairway.

According to a report from golf writer Geoff Shackelford, Steele’s situation was much more serious. An eyewitness told Shackelford the 49-year-old Steele was seen writhing in pain, “holding her nose, mouth, or chin area” with her hands “covered in blood.”

Statement of appreciation from ESPN’s @sagesteele, who was struck by a golf ball Thursday at the PGA Championship pic.twitter.com/6HDlDz7QBC

Steele was taken to a nearby medical facility for treatment and needed some dental work as well. Understandably, she was unable to finish her assignment, but a tweet from ESPN’s dedicated public relations account confirmed she was recovering at home in Connecticut and grateful for the care she received.

“With the help of my team, I hope to recover quickly for my three kids, and get back to work,” Steele said in the statement. “Looking forward to seeing everyone again soon.”

Wise, on the other hand, was the victim of a player-on-player plunking. As he played the par-4 seventh hole on Friday, Wise “went down on a knee for about 30 seconds” after Smith’s drive found his noggin, according to Golf Channel’s Ryan Lavner, who snapped a photo of the 25-year-old applying ice to the injury after the round.

Cam Smith’s tee shot on the 2nd hole hit Aaron Wise in the head on the fly. Here’s ESPN+ Featured groups coverage talking about it pic.twitter.com/TYeLjxV11J

“We were in that right rough area, and he just got domed,” said Joel Dahmen, one of Wise’s playing partners.

On his Instagram story later that day, Wise posted a picture of the Adidas cap he was wearing. A little red blur from Smith’s sharpie mark had transferred onto the crown on contact.

“Nothing bounces like an Adidas golf hat … or maybe I’m just that hard-headed,” Wise wrote in the post.

Aaron Wise got smoked with Cam Smith’s tee shot while standing in the adjacent 7th fairway. Went down on a knee for about 30 secs but seemed to shake it off. Post-round, he had ice on the back of his head; showed his playing partner the mark on his hat. pic.twitter.com/bBDP4K4XJX

The quirky set-up at Southern Hills Country Club — where some tee boxes overlook greens and several fairways abut one another — certainly contributed to the two incidents.

Still, it’s always worth recognizing the inherent dangers of attending a golf tournament. Even the best in the world can miss — and miss badly — so fans are advised to avoid especially vulnerable spots on the course and always pay close attention to the action.