Justin Thomas Rallies From 7 Back To Win Second PGA Championship 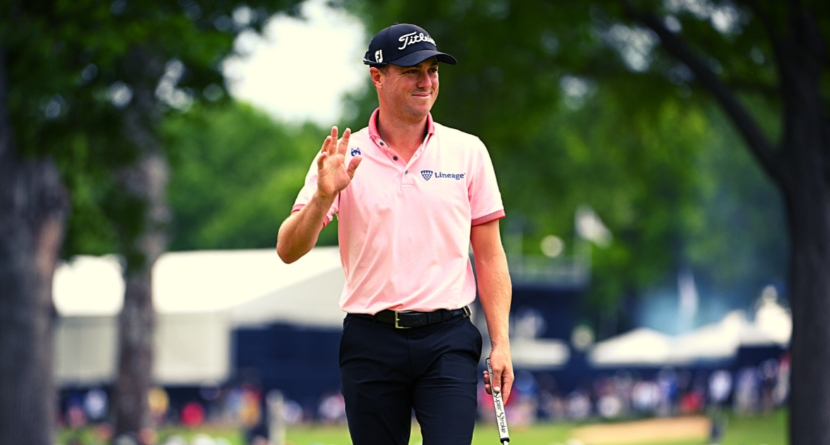 The wait after the wait can be the longest. And finally, five years later, Justin Thomas is a two-time major champion.

Rallying from seven shots down to start the final round, Thomas matched the low round of the day with a 3-under-par 67 to punch his ticket to a three-hole aggregate playoff at Southern Hills Country Club on Sunday. And from there, the 29-year-old birdied the first two extra holes — a first in major championship history — to edge Will Zalatoris by a stroke and hoist his second career Wanamaker trophy.

Though Thomas’ comeback wouldn’t have been possible without a gut-wrenching collapse by Chile’s Mito Pereira. The tournament’s surprise 54-hole leader was still in front by a stroke when his tee shot on the 18th hole squirted into the creek, setting up a double-bogey.

“I was asked early in the week what lead is safe, and I said, ‘No lead,”’ Thomas told reporters afterward. “I can’t believe I found myself in a playoff.”

Thomas and Zalatoris traded birdies on the par-5 13th. Then, Thomas turned in what will undoubtedly rank as one of the signature shots of his career, finding the putting surface on the short par-4 17th with a gorgeous 3-wood fade that he punctuated with a textbook club twirl.

The son of a PGA professional who still serves as his swing coach, Thomas joins an impressive list of multi-time PGA champions. One member of that club, Tiger Woods, was among the first to congratulate Thomas, phoning his Jupiter, Fla., neighbor in the aftermath of the victory.

Big congrats to @JustinThomas34! He kept himself in this championship until the very end and once he got his shot he didn’t look back. Thanks to Tulsa and the @PGAChampionship for a great week.

It’s a win that also cements Thomas as one of the great young players of the modern era; others after World War II who won two majors and collected 15 PGA Tour victories before turning 30 include Woods, Jack Nicklaus, Johnny Miller, Tom Watson and Rory McIlroy.

A former world No. 1, Thomas ascends to No. 5 in the Official World Golf Ranking. He said he relied on veteran caddie Jim “Bones” Mackay to boost his confidence throughout a final round that was a grind.

“It was a bizarre day,” Thomas said. “I definitely crossed one off the list; I’ve never won a tournament shanking a ball on Sunday, so that was a first, and man, I would really like it to be a last.

“Bones did an unbelievable job of just keeping me in the moment today. We just tried to play the golf course for what it is, and this place is so tough.”

Early in the round, it looked like McIlroy might author another too-little-too-late charge that is, unfortunately, becoming his signature. The 33-year-old carded a 2-under par 68 to finish eighth, delaying his quest for a fifth major.

McIlroy’s 5-under-par 65 on Thursday registers as an especially crushing footnote given he just needed to play even-par golf over the next three days to join Thomas and Zalatoris in the playoff.