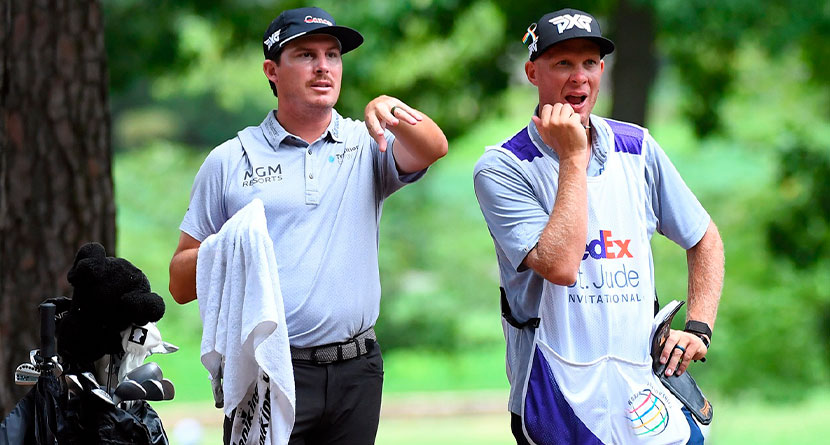 For some golf fans, the PGA Tour is synonymous with private jets and luxurious rental houses week in and week out.

And while that assumption comes out of the jet-setting lifestyles of the very upper echelon on players who are well established, the reality of life on the road for many of the best players in the world is commercial airplanes and hotel rooms.

However, in these uncertain times, the best laid plans of pros and caddies can get turned upside down as Joel Dahmen’s looper, Geno Bonnalie, shared with his social media followers on Monday from what he called “The Mamaroneck Truck Stop and Motor Inn” following a last-minute cancellation of his AirBNB for this week’s U.S. Open at Winged Foot.

When your Airbnb cancels on you the day you arrive to the US Open: pic.twitter.com/1krlMq6r90

On his edition of “Caddie Cribs: Major Championship Edition,” Bonnalie begins his tour with a shoddy plaster job before getting over to his mini coffee maker. That’s when things turn wild.

Bonnalie points out what he interprets to be some bullet holes. From there, he follows his true-crime theme into the bathroom area.

“When you saunter over a couple more feet, where I don’t know exactly what took place — maybe more bullet holes? It was recently done, it’s flaking right off,” he said. “Then you look down below and I think we have some blood splatter. And then you’ll notice the carpet has been bleached out, so possibly: body shot, blood, bleach, drag.

“I think as they took the body into the lovely bathroom, they may have bumped the sink. Thankfully, we have a shower rod that is supporting the sink, but it is not stable. I think if I accidentally bump that, I could break a toe.”

After commenting further on the “quality craftsmanship” of the unit, Bonnalie summed up his expectations for the week away from the golf course.

“Overall, just a solid experience, a lovely bedspread,” he said. “It’s going to make for a great week.”

The video has gone viral with nearly 1 million views as of Wednesday morning. In responding to Tour pro Kelly Kraft, Bonnalie confirmed that this was the worst living arrangements he’s had while out on Tour.

Geno doesn’t work for one week and this is all he can afford. God speed my friend! https://t.co/ThHlu3G8ax

And you may be wondering what’s going on with Dahmen throughout all of this, the 61st-ranked player in the world didn’t seem overly concerned about his caddie’s well being, instead offering a lighthearted response to Bonnalie’s video tour.

Geno doesn’t work for one week and this is all he can afford. God speed my friend! https://t.co/ThHlu3G8ax

If other responses are to be believed, Bonnalie’s stay may be a one-night affair. Offered better lodging, Bonnalie confirmed that he believes his AirBNB situation was worked out for the remainder of the week.