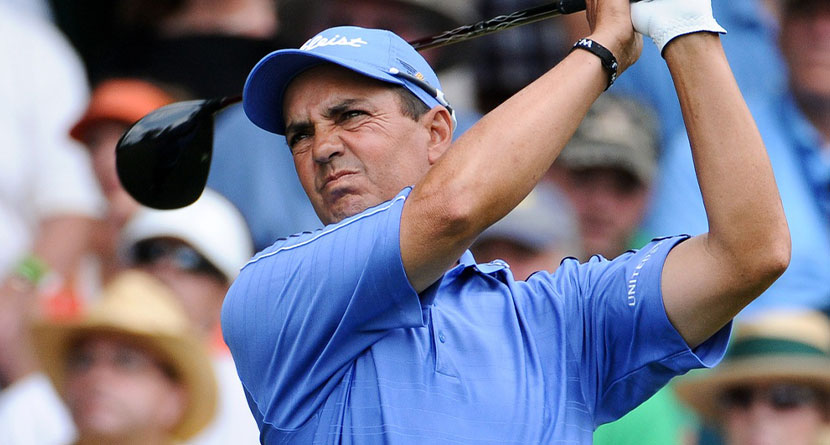 Yet he’s still a regular competitor as the charges loom.

MaryAnn O’Neill, 41, has provided to authorities multiple instances of alleged domestic abuse, including Pernice punching her in the leg, striking her with a cell phone and grabbing and twisting her wrists.

An independent marketer from Boston, O’Neill has worked with the PGA Tour to create sponsorship opportunities. She contacted the PGA Tour on multiple occasions with evidence, including audio recordings of cell phone conversations, detailing Pernice’s alleged pattern of abuse. Her most recent communication was in May 2021 following the Regions Tradition tournament in Birmingham, Ala.

The PGA Tour typically does not comment on members’ suspensions or punishments but issued a statement in this case.

“While we do not disclose specific disciplinary action and will not comment on this instance in detail, it is important to note that the PGA Tour takes allegations of domestic violence very seriously,” Joel Schuchmann, senior VP of Communications for the PGA Tour told Sports Illustrated. “In matters involving potential criminal activity, we immediately offer assistance in bringing forward the complaint to the appropriate authorities for further investigation and action.”

Pernice, an eight-time winner on the PGA Tour and PGA Tour Champions, faces felony charges for intimidation of O’Neill in Massachusetts. His attorney, Patrick Donovan, said a hearing is scheduled for Sept. 29th to dismiss those charges.

“Tom Pernice vehemently denies ever being abusive in any way, either physically, verbally or financially to Ms. O’Neill,” Donovan said. “Since their breakup [in the summer of 2021] Ms. O’Neill has proven herself to be a liar and a thief hell-bent on destroying Mr. Pernice. … She uses a distorted version of the facts to only ruin Mr. Pernice and financially benefit herself all for breaking up with her. She will stop at nothing to extort Mr. Pernice and unjustly enrich herself. It comes as no surprise Mrs. O’Neill would resort to a disinformation campaign.”

Pernice has competed in 13 tournaments on PGA Tour Champions this year, most recently the Kaulig Companies Championship earlier this month. He’s 35th in the Charles Schwab Cup with more $320,000 in earnings.

Statements from the Tour’s spokesman reveal Pernice could face further punishment after a verdict is reached on the criminal charges.

“We also take appropriate action based upon our own investigation, including – but not limited to – suspension from tournament play as well as resources and treatment, such as mandatory counseling,” Schuchmann said. “ Furthermore, we may take further action based upon any findings by law enforcement and/or the outcome of any criminal proceedings.”

Pernice has competed in 845 tournaments on the PGA Tour and PGA Tour Champions and earned more than $24 million during his career.