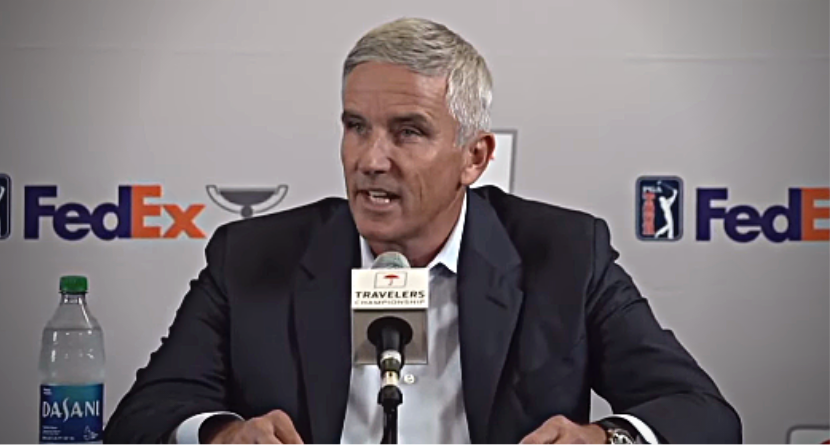 In response to the gravest threat ever posed to its position as the “preeminent golf tour in the world,” as commissioner Jay Monahan put it Wednesday, the PGA Tour announced a series of drastic changes designed to incentivize loyalty among members by streamlining its playoff format and attaching massive purses to its most prestigious events.

“Currently, no one organization owns or dominates the game of golf,” Monahan said at a press conference from TPC River Highlands, the site of this week’s Travelers Championship. “Instead, the various entities, be it Augusta National or the USGA or the LPGA or the PGA Tour or the PGA of America, work together to meet our own respective priorities, but with the best interests of the game overall at heart.

“But when someone attempts to buy the sport, dismantle the institutions that are intrinsically invested in its growth, and focus only on a personal priority, that partnership evaporates, and instead we end up with one person, one entity, using endless amounts of money to direct employees, not members or partners, toward their personal goal, which may or may not change tomorrow or the next day. I doubt that’s the vision any of us have for the game.”

At the conclusion of the 2022-23 season, the Tour will increase purses at eight events, including the Arnold Palmer Invitational, the Memorial Tournament (hosted by Jack Nicklaus) and the Genesis Invitational (hosted by Tiger Woods). The number of players who qualify for the FedEx Cup will drop from 125 to 70, and only those players will secure their status for the following season.

The rest will have to compete for their status in a series of domestic fall events that will permanently replace the wraparound schedule. And in what’s perhaps the most obvious rebuttal to the Saudi-funded LIV Golf Series, the Tour will implement a three-event, no-cut international series for top players with huge dollars at stake beginning in the fall of 2023.

In total, the Tour is pumping $160 million into the coffers of its players, who were informed of the changes in a memo circulated Tuesday.

A show of strength, along with anything resembling a course of action, had been sorely lacking from the Ponte Vedra Beach delegation prior to Wednesday. Monahan insisted many of the plans he detailed were already in the works, that they weren’t just a desperate ploy to stem the rising tide of LIV defections. But the departures of Brooks Koepka, Bryson DeChambeau, Dustin Johnson and other Top-20 talents clearly accelerated the Tour’s urgency.

“If this is an arms race and if the only weapons here are dollar bills, the PGA Tour can’t compete,” Monahan said. “The PGA Tour, an American institution, can’t compete with a foreign monarchy that is spending billions of dollars in an attempt to buy the game of golf.

“We welcome good, healthy competition. The LIV Saudi Golf League is not that. It’s an irrational threat, one not concerned with the return on investment or true growth of the game.”

Here are some more details on the changes that are coming to the PGA Tour: