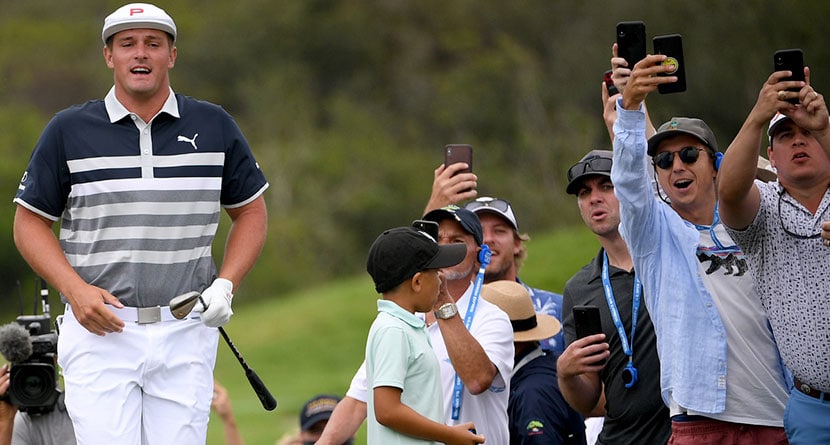 PGA Tour Commissioner Jay Monahan said that the circuit will attempt to wade into unchartered waters going forward as it plans to enforce a no-heckling policy stemming from the long-running Brooks Koepka-Bryson DeChambeau feud.

Precipitated by Koepka encouraging — and even incentivizing — fans to give DeChambeau a hard time by calling him by Koepka’s name — a rather innocuous-on-the-surface directive — Monahan told the media on Tuesday at East Lake, site of this week’s Tour Championship that harassing or disruptive behavior and comments would no longer be tolerated at tournaments and could lead to expulsion from events, per the Tour’s updated fan conduct policy.

In his season-ending press conference, Monahan started with some boilerplate opening remarks, ticking the boxes of corporate shootouts and general chest-thumping before steering the conversation into an interesting direction.

Before I open it up to questions, I wanted to take a minute to address a topic that’s been top of mind lately for our players, fans, and of course, for those of you in the media. I’m talking about fan behavior and the interaction with our athletes when that behavior crosses the line and what we should all be doing to address it when it does,” Monahan began.

“I think we can all agree that we have seen issues as of late across the sports landscape where that pent-up demand plays out in an ugly way. Golf is not immune from unfortunate and disruptive behavior, although I would say that we do have the very best fans in the world. This is about just a few bad actors. And for the record, this isn’t about any one particular player or one particular incident, but in some situations, it’s apparent that we have gotten away from the very civility and respect that are hallmarks to our great game.”

“By coming to a PGA Tour event, you’re expected to contribute to a welcoming and safe environment by refraining from and reporting any unsafe, disruptive or harassing behavior,” Monahan said. “Comments or gestures that undermine the inclusive and welcoming nature of the game will not be tolerated, nor will any harassment of players, caddies, volunteers, officials, staff or other spectators.

“Fans who breach our code of conduct are subject to expulsion from the tournament and loss of their credential or ticket. We’re going to show everyone how easy it is to enjoy yourself at an event while also respecting the athletes in the field of play and the fans around you, many of whom are families with young kids who have a chance to be lifetime fans of the game themselves. Quite honestly, we should expect nothing less from each other, whether we’re at a golf tournament or elsewhere in life.”

It took all of one question for Monahan to be pressed on “the very real-world situation with Bryson.” Would being called “Brooksy” qualify as harassing behavior when it’s said to Bryson on a golf course,” he was asked.

“Yes, and the reason I say yes is, you know, the barometer that we are all using is the word ‘respect,’ and to me, when you hear ‘Brooksy’ yelled or you hear any expression yelled, the question is, is that respectful or disrespectful? That has been going on for an extended period of time,” Monahan said. “To me, at this point, it’s disrespectful, and that’s the kind of behavior that we’re not going to tolerate going forward.

Even while the Tour takes the code of conduct seriously, some players on the Tour took a more light-hearted approach to the “call me the wrong name, get kicked out” surface-level message.

It’s official. Calling Bryson anything but his real name will get you thrown out of a golf tournament. So if any one of you call me Kevin Na, Danny Lee or Sang Moon Bae, we’re gonna have some problems. 💪🏼

I’ve been called Lumpy, Oosty, Clarkey (amongst other names that I can’t mention) on and off for the last 25 yrs!!! And now you bring a rule in! @PGATOUR

The wide-ranging possibilities of the updated code of conduct will surely be interesting to follow in the coming weeks and months. And whether or not you agree with the sentiment that heckling, harassment or blatant disrespect shouldn’t be a part of professional golf, the muddy waters of enforcement will be another matter altogether.