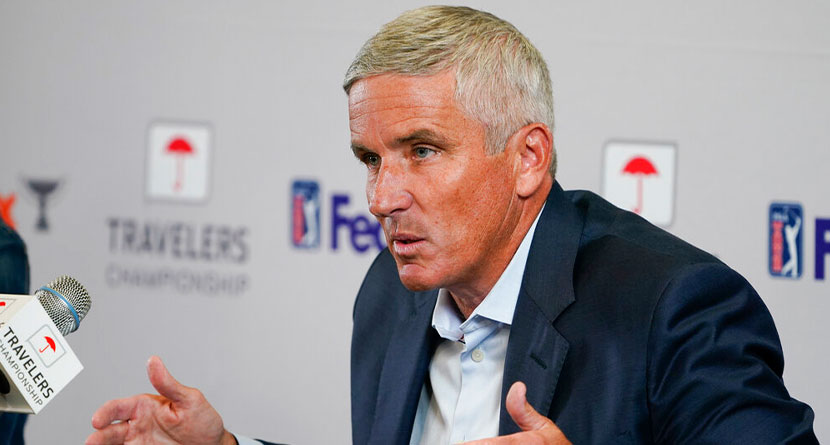 KAPALUA, Hawaii (AP) — PGA Tour Commissioner Jay Monahan described a landscape Sunday of two rival leagues going down different paths, even as the PGA Tour is still trying to formulate plans for a revamped structure in 2024.

“We’re at a point now where it’s product versus product,” Monahan said.

He spoke in a formal setting for the first time since the Tour Championship in August, when he outlined a 2023 schedule of elevated tournaments that average $20 million in prize money.


The PGA Tour began its year at Kapalua for the Sentry Tournament of Champions. LIV Golf, the Saudi-funded league that Greg Norman launched in June, finished its inaugural year with eight tournaments.

LIV Golf does not resume until Feb. 23-26 at Mayakoba Golf Resort in Mexico, which had hosted a PGA Tour event every year since 2007. The prize fund at each LIV event is $25 million, with $5 million directed toward a team competition.

Including bonuses, Dustin Johnson made just over $35.6 million in eight events.

Since the Tour Championship, the PGA Tour suspended six more players — including British Open champion Cameron Smith and Joaquin Niemann — for signing deals to play with LIV Golf. Smith would have been the defending champion this week at Kapalua.

Outside the ropes, there’s the matter of LIV’s antitrust lawsuit against the PGA Tour, and the tour’s countersuit against LIV. The original lawsuit filed in August is not set for trial until January 2024, with a deadline to file for summary judgment at the end of June.

Monahan said he can only pay attention to what the PGA Tour is doing.

LIV Golf is known for its 54-hole events with no cuts and a shotgun start, combining individual scores with 12 four-man teams. The circuit is still awaiting word on whether it will receive points from the Official World Golf Ranking.

Outside of the challenge from LIV Golf, the tour is working on a restructured schedule that players hope will have some staying power of a decade or longer. Key players have referred to this year as a bridge to 2024.

The main idea is to bring the best players more often and to give fans a better sense of knowing who is playing and where. LIV Golf, for example, requires its players to be in all 14 events on its schedule, whenever that is completed.

There also is a push for smaller fields. The Sentry Tournament of Champions is the first of five events this year without a cut. The other is the Match Play in Texas, which could be on its last leg, and the three FedEx Cup postseason events.

Even if the elevated events in 2024 have limited fields, Monahan said he felt it was important that there still be a cut.

“I’ve always felt a cut is important to the sport,” he said. “Depending where we end up in the field, that’s absolutely a consideration.”

Monahan said he expects to announce a fall schedule as early as March during The Players Championship. It will be a chance for some players to secure their status for 2024, and he expects even the top players might want to compete.