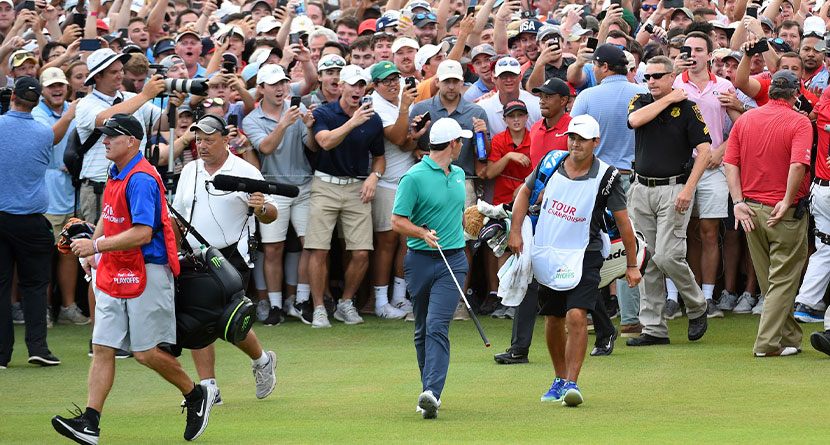 The PGA Tour and Netflix are working together on a docuseries that will take fans inside the ropes for a look at life on and off the PGA Tour for some of the biggest stars in the game, according to reports from Golf.com and GolfDigest.com.

The all-new episodic documentary series will aim to provide unprecedented behind-the-scenes access to some of the best golfers in the world as they play the 2021-22 PGA Tour season, with production and filming set to begin early next season.

Inspired by Netflix’s wildly popular Formula 1 docuseries “Drive To Survive,” the Tour is teaming up with Box to Box Films, the company behind Drive to Survive, Vox Media and Main Event Producitons, a company created by Rickie Fowler, to create the show that will feature roughly 12 players, bringing fans along Tour stop to Tour stop and everywhere in between.

Awesome news for golf fans: Netflix and the PGA Tour are producing a docuseries on the upcoming season.

-Modeled after F1 “Drive to Survive” success
-Focused on a dozen players
-Several top pros on board, others in negotiations
-Hell yeahhttps://t.co/gUDO5Kh2Mk

Talk about the “Drive To Survive” model comes at the 6:50 mark.

“There’s been talks over the years of how (a series like) that would work and if guys would be open to it,” Fowler said. “I think, one, it would be about finding the right guys. I think there is a lot of content and space for it to be done because people don’t really see the full ins and outs of what we do.

“That’s really what want right now; not just the normal stuff that you can watch on TV. That’s why the F1 series has done so well: it’s a different, behind-the-scenes look.”

While the PGA Tour, Box to Box Films and Vox Media all declined to comment on specifics of the series, reports have already begun to surface as to who would be featured in the first season of the show, including “big names… (that include) major champions, Ryder Cuppers and some half-dozen of the top 20 in the current World Ranking,” according to Golf.com’s Dylan Dethier.

GolfDigest.com’s Daniel Rapaport reported Tony Finau, Rickie Fowler and Cameron Champ are among players “highly interested” while execs from Vox Media are in Atlanta this week where the Tour Championship is being held to woo the likes of Justin Thomas and Bryson DeChambeau.

Rapaport also reported that players wouldn’t be compensated financially, but would benefit in exposure to a wider audience.

It’s clear that the Tour is hoping to replicate the Formula 1 and Netflix model, which the CEO of McLaren Racing called “the single most important impact for Formula 1 in North America.”