How Will Tour Events Look Post-Pandemic? 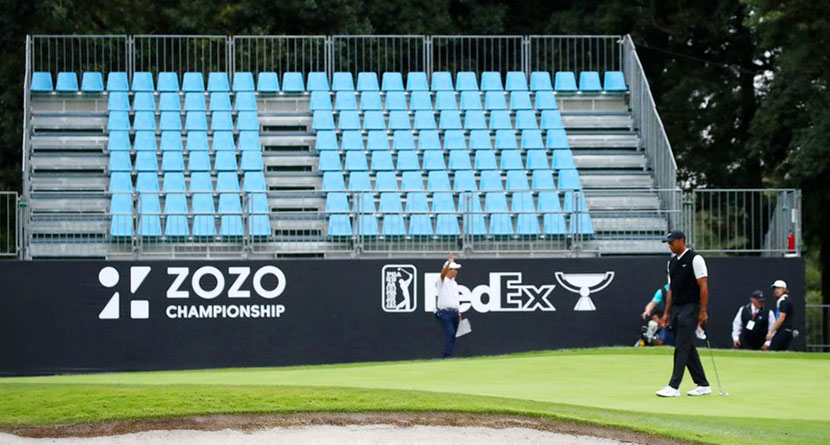 As states around the country begin to put their reopening plans into motion and professional sports leagues begin to dip their toes in the waters of restarting paused or delayed seasons due to the coronavirus pandemic, the PGA Tour — made its intentions known weeks prior — is on to its next stage of planning.

In a comprehensive look at what the first four events — and possibly more — would actually look like without fans, GolfDigest.com’s Joel Beall spoke to multiple tournament organizers, broadcast sources and the Tour to find out just what goes into a PGA Tour event, and how a skeleton crew would look in order for play to resume.

How Many People Will Be On The Grounds?

According to Beall’s report, more than 99% of the on-site workforce at a PGA Tour are volunteers. Officials at the Honda Classic shared their volunteer breakdown:

With between 1,400 and 1,700 volunteers typically on the grounds, officials for the first four events — the Charles Schwab Challenge, the RBC Heritage, the Travelers Championship and the Rocket Mortgage Classic — estimate they will need 500 to 700 volunteers to run their tournament.

“It’s not like we can run a tournament with myself and two other people,” Michael Tothe, the Charles Schwab Challenge tournament director, said. “It takes the majority of our volunteer workforce. We [can get by] without all of them, but we need many of them. There could be as many as 1,000 people on the property at any one time. People probably don’t realize what goes into this.”

As far as television workers, a normal 70-plus person crew will be cut down closer to 45-50.

The PGA Tour aspires to return in June by limiting the number of people on site, most notably by not having fans. But a deeper look at how Tour events operate underscores how much uncertainty remains
https://t.co/WAv4WmuSse

The unknowns are where the line will be drawn with players and sponsors. Aside from a player and caddie, an ideal situation would have no one else on the grounds, but the reality of “team members” such as swing coaches, equipment reps, physio, etc. has proven tough waters to navigate. Then there are the sponsors and their desire to be on the grounds.

“There’s no easy answer,” RBC Heritage tournament director Steve Wilmot told Beall, “but we’re working with the Tour to identify how to go about this.”

CBS Sports is scheduled to be televising the first 11 events after the restart, and as stated above, the headcount traveling from event to event is expected to be cut by 30-40%.

“You will still have the talent, production, operation, cameras, audio, technicians, trucks,” a source said. “There won’t be areas cut.”

From a fan’s perspective, aside from the obvious absence of people on the grounds, CBS told Golf Digest that there will likely be fewer featured groups, featured holes and alternate camera angles.

As for PGA Tour Live, discussions about the ability to have additional coverage outside of normal windows are still being considered.

How Much Money Is Being Lost?

While broadcast contracts are monumental on their face, when you get down to individual events, the huge numbers negotiated by the Tour aren’t nearly hitting home for every tournament. The vast majority of a tournament’s earning potential is dictated primarily by pro-ams, ticket sales, hospitality and concessions.

Pro-ams alone — which account for roughly 80 tee times at roughly $30,000 per group between Monday and Wednesday’s events — generate 80-85% of the tournaments take when coupled with the hospitality that usually accompanies it.

That’s not to mention ticket sales, refunds and deferrals during this unprecedented time.

“The weeks leading up to the tournament is our biggest selling window, and I don’t mind telling you we lost $800,000 in ticket sales,” Wilmot said.

This also trickles down to the players, although just how much this will impact purses has not been figured out. Estimates have been ballparked between 10% and 30%.

“It’s not a done deal, but sacrifices have to be made,” the director of a tournament in late summer said. “It would be ignorant to proceed with the status quo.”

What Will Change From A Competition Perspective?

While there will be television towers, the vast majority of the infrastructure during the first four events will be missing, which — make no mistake — could have a massive impact on the competition.

“One of the biggest changes will be seeing the courses we play with no stands. That’ll change the look a lot,” Marc Leishman said. “It’ll be a weird look, that’s for sure.

“I think some guys will struggle with it more than others. Some feed off the energy the fans produce, and others can create their own. I’m probably somewhere in the middle.”

Case in point: Jordan Spieth’s win at Colonial in 2016 in which a free drop from a grandstand aided him in a critical save on the 71st hole.

“He would have been 30-40 yards over the green and probably in the 14th fairway,” Ryan Palmer, who was paired with Spieth that day and plays Colonial regularly. “A lot of players are going to see a different course.

“It will be a test of showing up and having your game ready and having a strong mental game that week to keep yourself motivated.”