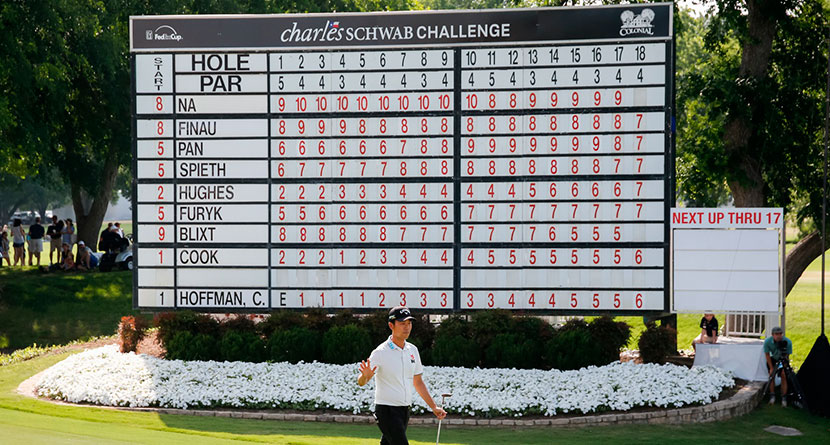 The PGA Tour released a 37-page “Health and Safety Plan” to its members on Tuesday laying out the process and procedures under which the Tour will operate when it gets back underway, scheduled to occur at the Charles Schwab Challenge at Colonial Country Club June 11-14.

The overall theme of the document was safety, with a layered approach to testing taking place before, during and after each even for players, while there will be a sort of “bubble” society implemented that includes designated hotels and chartered jets for players and caddies, according to GolfChannel.com’s Rex Hoggard and GolfDigest.com’s Brian Wacker.

The testing procedure will be three-pronged: a questionnaire for players, caddies and other officials, temperature testing and a RT PCR nasal swab/saliva test. Players and caddies will be sent a test before traveling and after arriving, and they will be required to administer all three tests on a daily basis.

“In implementing our testing plan, we will not do so in a manner that takes away from testing and medical resources in the communities in which we play or for affected groups in those communities,” the plan read.

If someone is to test positive for COVID-19, they will “isolate for a minimum of 10 days with no subsequent symptoms, or two negative test results at least 24 hours apart.” If the positive test occurs after a player makes the cut, he will receive last-place earnings.

“It’s the most comprehensive plan the Tour has put out that puts our health and safety at a top priority,” an anonymous Tour veteran told GolfDigest.com. “I’m very comfortable with it.”

Aside from testing, more restrictions have been put in place for what would be considered a “normal” event. For instance, no families will be allowed at the tournament site and tightened access to restricted areas and the clubhouse will be enforced. Support staff, such as swing coaches and trainers, will be scaled back as well and strict social distancing measures will be in place for those individuals.

Ooooh, little nugget of news from the Scottsdale Open range: when play resumes the PGA Tour will charter jumbo jets to ferry players and caddies from tournament to tournament, helping to keep them in a germ-free bubble.

As for the competition, players and caddies have been encouraged to “fulfill normal tasks” such as removing flagsticks and raking bunkers. The Tour will provide sanitary wipes and hand sanitizer as well as personal protective equipment for everyone one the grounds, a number Wacker quoted to be around 1,100 per day.

By and large, the procedures laid out in the plan have been well received by the players, and they are ready to give it a go next month.

“The message from Jay (Monahan) was that we’ve talked to doctors, talked to professionals, talked to politicians — these are the steps we need to take to be safe,” Kevin Streelman told Golf.com’s Alan Shipnuck at this week’s Outlaw Tour Scottsdale Open. “Now are you guys comfortable playing competitive golf in this arena? The answer was a resounding yes.

“We all have questions and we all have concerns but it’s what we do, it’s what we love. I know the fans are missing it like crazy. If we can do something safe to appease the fans and sponsors and our crazy golf addictions, it’s good for everybody. Right now we’re just making sure we can tick all the boxes. But one thing I took from the call is that despite all the issues, we’re all very anxious and eager to get back out there.”