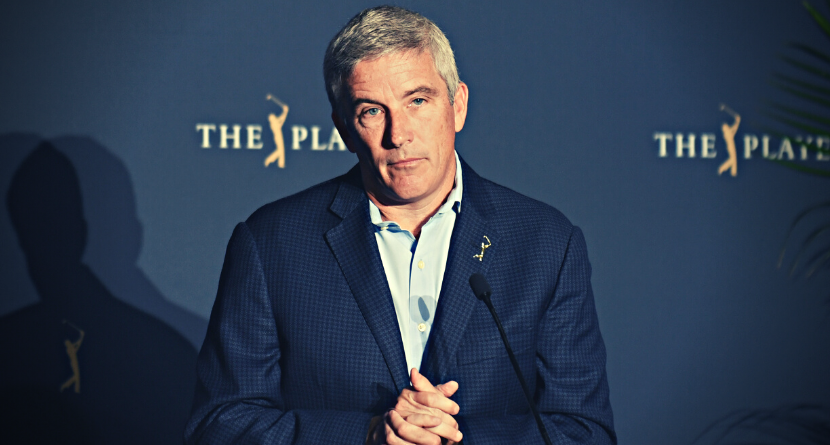 Dispensing with its longstanding policy of keeping disciplinary measures in-house, the PGA Tour on Thursday announced it was suspending all current or former members who participated in the LIV Golf Series’ London launch. And the same fate awaits any player scheduled to compete in future events.

The swift and severe verdict was rendered about a half-hour after the breakaway circuit’s 9 a.m. shotgun start. In a memo to members that was obtained by multiple media outlets, Phil Mickelson, Dustin Johnson, Sergio Garcia, Ian Poulter, Lee Westwood, Kevin Na and others were all specifically named as players who are no longer welcome to compete on the Tour or its subsidiaries — including international team events like the Presidents Cup.

Johnson, Garcia and Na were among those who had resigned their Tour membership, a preemptive tactic designed to evade the discipline PGA Tour commissioner Jay Monahan has been promising for months. But that loophole was closed; they will have their FedEx Cup points scrubbed away and won’t be eligible to compete in Tour events as non-members, through sponsor’s exemptions or by any other means.

In total, 17 players have been suspended and more are sure to follow, with major champions like Bryson DeChambeau and Patrick Reed set to debut next month when Pumpkin Ridge in Portland, Ore., hosts the series’ first event on American soil.

“These players have made their choice for their own financial-based reasons,” Monahan wrote. “But they can’t demand the same PGA Tour membership benefits, considerations, opportunities and platform as you. That expectation disrespects you, our fans and our partners. You have made a different choice, which is to abide by the Tournament Regulations you agreed to when you accomplished the dream of earning a PGA TOUR card and — more importantly — to compete as part of the preeminent organization in the world of professional golf.”

Earlier this week, the USGA released a statement indicating LIV Golf players who qualified to compete in the U.S. Open won’t have that right revoked. It remains to be seen whether the Masters, which controls its own guest list, or the Open Championship, which is run by the R&A, will block these defectors, many of whom have said they intend to continue participating in the sport’s most prestigious events.

“I am certain our fans and partners — who are surely tired of all this talk of money, money and more money — will continue to be entertained and compelled by the world-class competition you display each and every week, where there are true consequences for every shot you take and your rightful place in history whenever you reach that elusive winner’s circle,” Monahan continued.

“You are the PGA Tour, and this moment is about what we stand for: the PGA Tour membership as a whole. It’s about lifting up those who choose to not only benefit from the Tour, but who also play an integral role in building it. I know you are with us, and vice versa. Our partners are with us, too. The fact that your former Tour colleagues can’t say the same should be telling.”

LIV Golf responded in kind with a statement of its own.

“Today’s announcement by the PGA Tour is vindictive and it deepens the divide between the Tour and its members,” the statement reads. “It’s troubling that the Tour, an organization dedicated to creating opportunities for golfers to play the game, is the entity blocking golfers from playing. This certainly is not the last word on this topic. The era of free agency is beginning as we are proud to have a full field of players joining us in London, and beyond.”

LIV Golf CEO Greg Norman has long indicated that he’s prepared to engage in a lengthy legal battle if necessary, and he has the players’ backing.

“I can only speak on information given to me by our legal team, and I have an extremely talented legal team in antitrust and anticompetitive laws, and we believe we’re in the right position,” Norman previously told ESPN. “We believe the players are independent contractors and have a right to go play wherever they want to go play.”