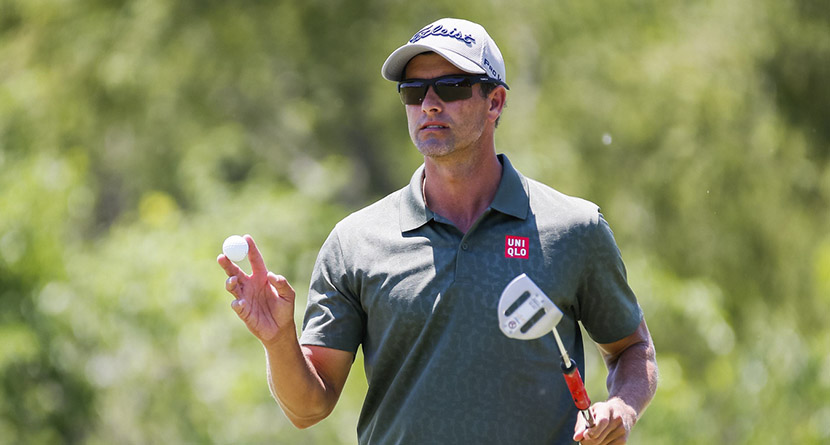 Trinity Forest showed its kinder side in its PGA Tour debut, though it still didn’t help Jordan Spieth notch his first hometown win. Adam Scott hasn’t missed a major since 2001, but his U.S. Open options are growing slim. And 15 years ago this week, Annika Sorenstam became a crossover star. 1. Trinity Forest gets passing grade as Wise wins Nelson crown. Three days of little wind and a storm-delayed Sunday made ideal scoring conditions at the AT&T Byron Nelson. Aaron Wise outraced Marc Leishman for his first PGA Tour victory, as 13 players in all carded four rounds in the 60s.


2. Miguel Angel Jimenez is the newest senior major champion. The stylish Spaniard went wire-to-wire to win the Regions Tradition, matching the tournament scoring record at 19-under-par 269. The only real question is what beverage went first into the trophy. We say either champagne or a Spanish rioja.

3. Pair of sub-30 front nines lifts alternate to Web.com win. Michael Arnaud didn’t crack the BMW Charity Pro-Am lineup until Kent Bulle’s withdrawal freed up a spot on Wednesday. Arnaud fired an 11-under-par 60 on Friday, including a front-nine 27, then turned in 28 on Sunday on the way to victory.

Adam Scott’s streak of 67 consecutive major starts is now in serious jeopardy after failing to get in via the top 60 in the world rankings by Sunday night’s cutoff.

Scott began the week at No.65 and needed to finish solo ninth at the AT&T Byron Nelson to slide past an idle Chesson Hadley for the 60th position. Despite a closing 65 at Trinity Forest, he wound up part of a three-way tie for ninth, leaving him at No.61.

“Just never got a hot run going,” Scott said afterward. “I feel like I struggled on the weekend reading the greens well enough to really get it going, but I think everyone but the leaders did that, too.”

Scott now faces two more options to get in, one of which is to go through final qualifying in two weeks. The other is to reside within the top 60 at the last-ditch deadline three weeks hence, which seems his preference.

Scott tees it up this week at the Fort Worth Invitational, which he won in 2014 to make him the only golfer to win all four regular PGA Tour events in Texas.

Looking for a new challenge after scoring 19 LPGA wins over the previous two seasons, Annika Sorenstam floated a trial balloon 15 years ago when she casually mentioned she’d be interested in teeing up at a PGA Tour event.

Within days, Sorenstam had nearly a dozen offers from PGA Tour stops. After soliciting opinions from PGA Tour pros and others, she selected Colonial – where power would be mitigated by placement required by the Fort Worth layout’s many doglegs.

The Swede would become the first woman to play a PGA Tour event since Babe Didriksen Zaharias in 1945. Not without some pushback, with Vijay Singh saying he’d refuse to play with her and Nick Price originally calling it a publicity stunt.

Record crowds flooded into Colonial that week, and Sorenstam feigned a stagger as she hit the fairway with her opening drive. A birdie at No.4 temporarily put her on the leaderboard.

The momentum couldn’t be sustained, though, as Sorenstam shot 71-74 to miss the cut. Nevertheless, the historic week is remembered for reframing her Hall of Fame career and for the inspiration for girls to follow their dreams.

STAT OF THE WEEK

With his share of 21st at Trinity Forest, Jordan Spieth still hasn’t been able to top his tie for 16th when he debuted in the AT&T Byron Nelson as a high-school junior back in 2010.

Moreover, the AT&T Byron Nelson is the only event in his native Texas in which Spieth has yet to record a top-10 finish.

Spieth’s lone victory in Texas came two years ago at Colonial, tying for second behind Kevin Kisner last year. He also was runner-up in 2015 at both the Houston Open and Valero Texas Open and reached the knockout round at the WGC Match Play in Austin in 2016 – officially a tie for ninth.

HOLE OF THE WEEK

The exit point of Colonial’s “Horrible Horseshoe” trio, No.5 annually stands atop the difficulty list when PGA Tour pros come to play. The hole had its own nickname in the early days – “Death Valley,” noting all the 1941 U.S. Open participants staggered by the punishment doled out alongside the Trinity River.

Two-time Masters winner Ben Crenshaw, a Texas native, counts it among the hardest holes he’s ever played. Adam Scott, whose 2014 Colonial win made him the first to capture all four standard Texas events, isn’t inclined to disagree.

“If you do challenge anything and go wrong,” the Aussie said, “then there is a big number waiting to happen.”

A year ago, one in every three plays at No.5 went for bogey or worse, ranking 30th on the PGA Tour’s list of toughest holes. It’s been among the top 70 in seven of the past 10 seasons.

Even with modern equipment and training, No.5 remains a long par-4 that requires both power and precision. The Trinity runs along the entire right side, obscured by trees. A large ditch awaits wayward tee shots to the left, and the fairway slopes in that direction.

THE GOOD
“I think what makes this course great is there isn’t one perfect way to attack it. Depending on the wind and a bunch of other factors, you have so many options on every hole. Variety is a good thing.”
– Beau Hossler
(Assessing treeless Trinity Forest’s debut as a PGA Tour venue.)