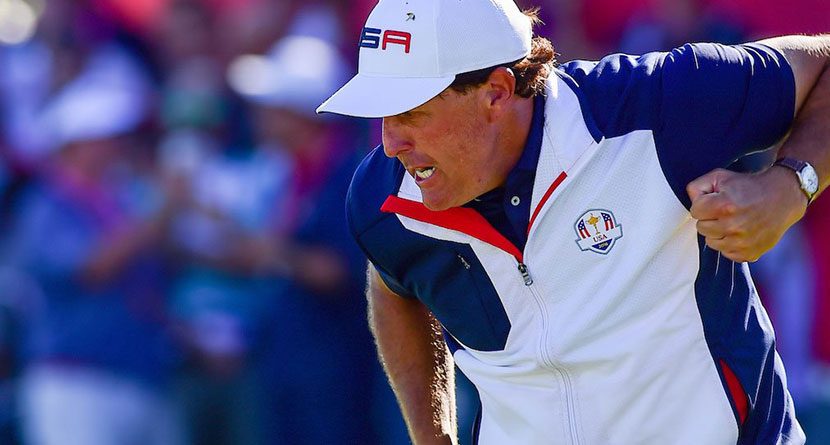 Less than two weeks removed from helping lead Team USA to their first Ryder Cup win in eight years, the smile has still yet to be wiped from Phil Mickelson’s face. Playing this week in the 2016-17 PGA Tour season opener in Napa, California, Mickelson made some bold predictions — both personally and collectively — for the U.S. side in 2018.

ESPN.com’s Bob Harig had the quotes.

Still relishing an emphatic U.S. Ryder Cup victory 10 days ago, Phil Mickelson is keen on playing on the 2018 team, even though he will be 48 when the matches are played in France.

“It’s been 22 years since there have been 10 Americans that have been able to beat me [out to make the team], so I don’t know why it would stop now,” Mickelson said Wednesday at Silverado Resort, where he will play in the Safeway Open. “I plan on being on the team in France and absolutely one of my goals is to play in France because I’ve never been on a winning Ryder Cup team over in Europe. I want to win a Ryder Cup over there, and I want to be part of that as a player.”

Phil asked if he sees himself as a player or capt./vice capt. for ’18 Ryder Cup. pic.twitter.com/r1ObBtDDVy

[Mickelson] has made every U.S. Ryder Cup team — never needing a captain’s pick — dating to 1995. The last time the U.S. won in Europe was in 1993. The 17-11 victory this year at Hazeltine was just the third victory in Mickelson’s 11 appearances.

“Well, after a solid five days off, it’s exciting to start the year,” Mickelson quipped, referring to the fact that the Safeway Open is the first tournament of the 2016-17 season. (Mickelson is not expected to play any other events this fall.)

“I’m still on an emotional high from the Ryder Cup. It’s been such a fun experience to share that with so many guys. … Guys have been texting all week long and staying in touch, and it’s really been an exciting thing to be a part of.”

It is kind of amazing to think about the run of success Phil has enjoyed throughout his career. Plus, he’s right: every Ryder Cup year he has earned his way onto the team by his play alone. Given his vigor and form, so long as he continues to stay healthy into the tail end of his forties, it’ll be hard to justify not putting Phil on the team.