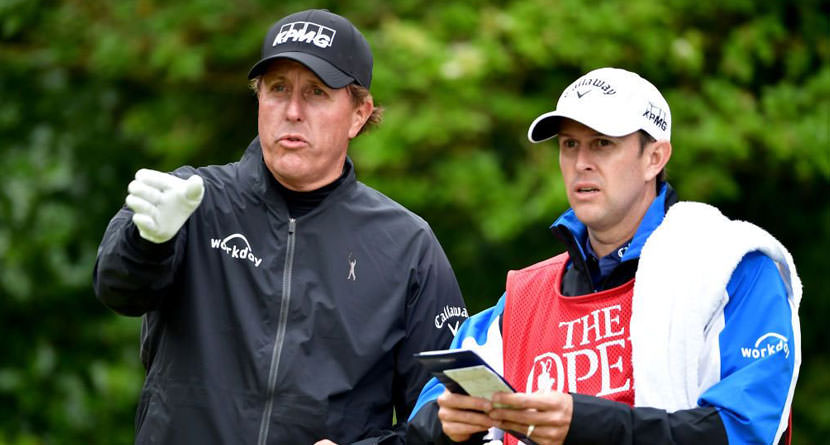 Phil Mickelson and longtime caddie Jim “Bones” Mackay ended their working relationship back in June. Six months later, the five-time major champion has come to a decision about who will carry his bag on Tour full-time.

For Phil Mickelson, change is anathema. No surprise he has named his brother as his full-time caddie. Jon Rahm will use others in the same management firm to count his millions.

Golfweek.com’s Jeff Babineau had the story.

Phil Mickelson has his caddie for 2017-18, and lo and behold, he chose a guy who grew up under the same roof. Tim Mickelson, former golf coach at Arizona State, was his older brother’s interim replacement when Phil and Jim “Bones” Mackay split in June after 25 years of working together. And now Tim will be on the bag full-time.

Of course, the other domino to fall in this was Tim’s job as an agent at Lagardere Sports, where he was managing the career of one of the game’s hot young superstars, World No. 4 Jon Rahm, his former star at ASU.

Get a release about an update on Jon Rahm’s management team and it subtly says, “Tim Mickelson, who was previously Rahm’s agent, has transitioned to serving as the full-time caddy for Phil Mickelson going forward.” Um, that’s newsy.

“Coach (Tim) Mickelson will always be important to me and has done many good things to support my career, and I wish him and Phil well in their new partnership,” Rahm said in a release Friday morning. “I am excited to continue working with Steve and Jeff, who originally recruited me to Lagardere Sports, and have Jamie join the team from Europe.”

So Tim will transition from searching for new talent to searching for those occasional errant drives that his long-hitting, World Golf Hall of Fame brother will hit. With Phil enthused about the progress in his game, gunning for a 2018 Ryder Cup spot and seeking his first PGA Tour victory since 2013 (Open Championship at Muirfield), it will be a nice day for the entire family the next time he holds aloft a trophy.