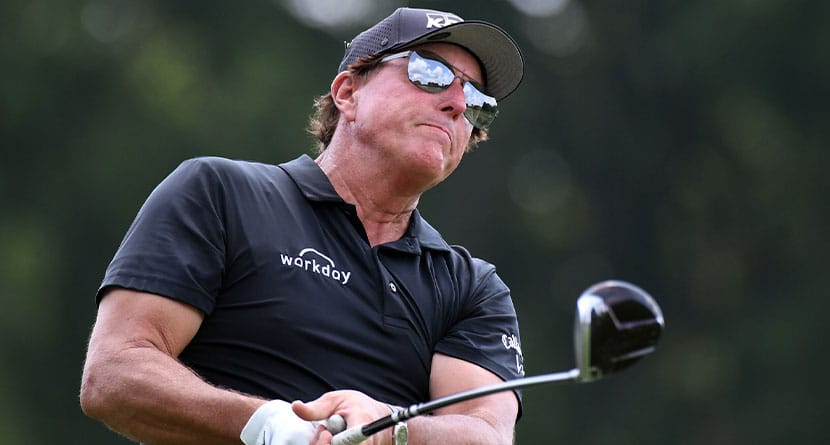 Former LPGA Tour commissioner Mike Whan has been on the job as the CEO of the United States Golf Association in an official capacity for two months and thanks to Phil Mickelson, he’s ready to field his first controversy.

Drummed up more publicly with the continued study of distance in professional golf, Mickelson preempted the governing body by attacking it on social media last week during the FedEx Cup Playoffs, leaking speculation that an equipment rollback was the first way the USGA planned to put a stop to distance gains in the sport.

“Word is USGA is soon rolling back driver length to 46 inches,” Mickelson wrote. “This is PATHETIC. 1st it promotes a shorter more violent swing (injury prone,) doesn’t allow for length of arc to create speed, and during our 1st golf boom in 40 years, our amateur gov body keeps trying to make it less fun.”

Word is USGA is soon rolling back driver length to 46inches.This is PATHETIC.1st it promotes a shorter more violent swing (injury prone,) doesn’t allow for length of arc to create speed,and during our 1st golf boom in 40 years,our amateur gov body keeps trying to make it less fun

Reached by ESPN.com’s Kevin Van Valkenburg, the USGA said it will not issue a statement in response to Mickelson’s tweets, which included a number of replies to followers in which he characterized the USGA as “amateurs” and stated “logic isn’t their strong suit.”

The organization told GolfChannel.com, “We’re holding off on (an) official statement for now, but will refer anyone who asks to see usga.org/distanceinsights if they have any question about research or our process.”

Mickelson, who uses a 47.5-inch driver, is among the few Tour pros who play drivers over the speculated-upon cap along with the likes of Bryson DeChambeau and Dylan Fritelli. The current cap on driver length is 48 inches.

The majority of shafts used on the PGA Tour are shorter than the 45-inch standard shaft that is available to most amateurs, but as Rory McIlroy, who uses a 44.5-inch driver, said, the USGA may be going after the wrong thing in terms of limiting distance.

“I went back to 44.5 (inches) earlier this year,” McIlroy said. “I don’t think driver length is the right way to tackle what the governing bodies want to do. I mean, I would be in agreeance with Phil. A lot of amateurs just pick a driver off the rack and it’s going to be 45 and a half inches. No one is even thinking of going to that.

“I’d be very surprised to hear the average golfer play a driver shaft any longer than 45 and a half. Don’t think it’s going to make a huge difference.”

The USGA’s initial Distance Insights proposal called for a “research” period that runs through November 2, 2021, so if the USGA is going to enact a restriction, we’re still a few months away from finding out assuming they follow their own timeline.