Mickelson Planning To Use 47.5-Inch Driver (Among Other Club Changes) At Masters 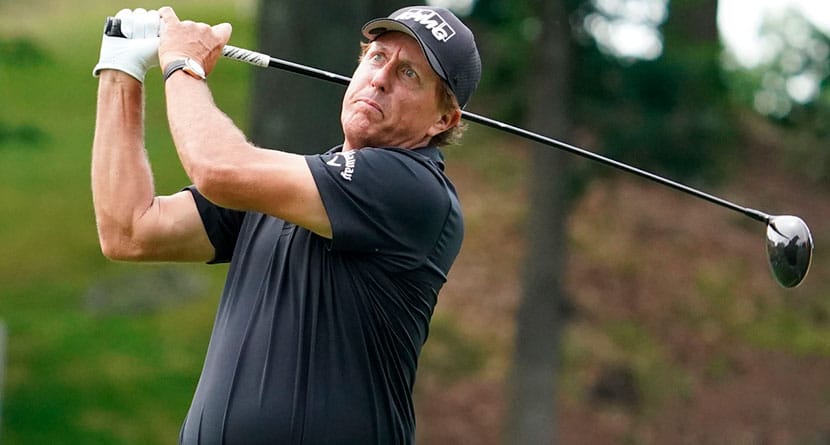 If there are two things we know about Phil Mickelson, they are that he’s never satisfied with the status quo and historically, he doesn’t hit a lot of fairways. If there’s a third thing we know, it’s that Phil loves the Masters.

The natural progression of that Mickelsonian reflection leads us to one club in particular as we look towards next week’s fall Masters Tournament: his driver.

The original outspoken purveyor of “hitting bombs” — even before Bryson DeChambeau went all-in on overpowering golf courses — Mickelson has given hints as to what he will try to do next by tinkering with his club setups in order to give himself the best chance at victory.

Surprisingly (or not), Mickelson and DeChambeau have both been eyeing Augusta National for longer than they’ve publicly let on, with Callaway PGA Tour manager Jacob Davidson telling Andrew Tursky of Golf.com that Mickelson has been testing progressively longer driver shaft lengths all season in an attempt to gain ball speed.

That testing came to fruition as Mickelson put a 47.5-inch driver in the bag for his second PGA Tour Champions victory at Dominion Energy Classic three weeks ago, which featured generous fairways akin to Augusta National. Similarly, he plans to put the longer driver in play this week at the driver-friendly Memorial Park, which will host The Vivint Houston Open, all with an eye towards Augusta.

“If you can fly it (that distance) there you have a chance to take advantage of some of those holes,” Mickelson said on the Callaway Golf podcast. “For example, No. 1, if you can carry that bunker, it’s a sand wedge in, and you’re thinking birdie. If you have to hit a 3-wood off of the tee and go to the side, or if you can’t carry it and you have to play more to the left, it’s a 6- or 7-iron into the green, so you’re thinking par. So there’s the ability to attack a number of holes if you can fly the ball a little bit farther.”

Last month, Mickelson spoke about the unusual conditions at Augusta National in the fall that have inspired the driver change.

“I think that the weather and the temperature could make a difference,” he said at the Zozo Championship. “I think the golf course will probably be a little bit more damp and play a little bit longer and require more carry. I think that the guys like what (Bryson DeChambeau) is doing, (Rory) McIlroy, Dustin [Johnson), the guys that can get it up there, it will have a big advantage with that kind of distance, but if you get wind and you get a lot of cold, we could also have a Masters like 2007 where Zach Johnson won in some rough weather. I just think the weather’s a little bit more unpredictable at that time.”

Naturally, Phil isn’t going to stop at a driver change. As Golf.com’s Jonathan Wall and Andrew Tursky reported, Mickelson will likely put a 2-wood in play to help with his gapping thanks to the longer driver.

Additionally, Mickelson is mixing up his iron configuration, putting a full set of Epic Forged Irons into play as a result of the mowing patterns at Augusta National. Yes, this man has thought of everything.

Phil’s goes in-depth on his equipment change heading into next week’s major. 😯 pic.twitter.com/vXsHoF4630

“They started mowing from green back to the tee, and so you’re always into the grain for your approach shot at Augusta,” Mickelson explained. “The ball tends to sit down a little bit lower, so you’re always catching it a groove low and it’s launching a little low and spinning a little more, it’s hard to get the ball up. I’ve had the (Epic Forged) 4 and 5-irons in my bag for some time and I’ve used the 6 and 7-irons for some time, but I’m also going to use the short irons — 8, 9 and wedge — in the Epic Forged.

“It’s funny, because it’s kind of a higher-handicap club, because the ball takes off the face so fast, but I have such a high spin rate already that I’m looking to reduce some of that spin. And this gives me a chance to come into the greens at Augusta much higher and softer.”