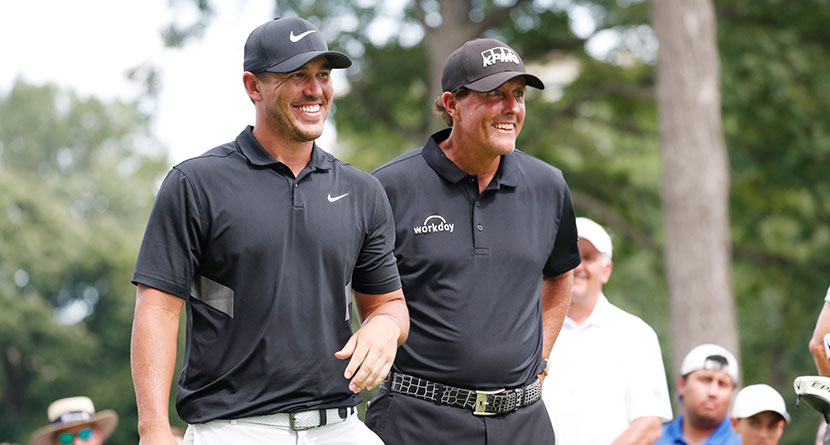 Phil Mickelson’s penchant for hitting BOMBS off the tee may have gotten him a little over his skis on Thursday at the Genesis Invitational.

Playing in a featured pairing with Brooks Koepka and Bubba Watson, Mickelson, on average, is the shortest hitter in the group by a decent margin, but that didn’t stop Lefty from cracking wise on Thursday.

For reference, Bubba ranks third on Tour in driving distance (316.6 yards) this year, and Koepka, playing in his first official PGA Tour round of 2019-20, averaged 321.2 yards off the tee on Thursday. Mickelson, however, is tied for 46th in driving distance (302.9 yards), so there’s some decent real estate between Phil and the big hitters in his group.


Not letting the facts get in the way of a good jab, Mickelson watched as Koepka launched a 338-yard drive on the par-4 third hole on Thursday and commented not with “good shot” or “nice ball,” but “that’s cute.”

The response elicited a chuckle from Koepka who stepped aside and watched as Mickelson reached back and pulled a drive into the deep rough some 40 yards behind him that would ultimately be lost, despite the efforts of a horde of fans.

Mickelson would be forced to re-tee, and Koepka took the opportunity to return the favor, taking a shot at Phil’s accuracy as the five-time major champion reloaded.

Brooks Koepka, standing in the middle of the fairway waiting for Phil to hit his third from the tee box, “If I stand here I should be safe, right?” ???

Koepka managed to make par on the difficult third hole, which bested Mickelson’s score of double bogey by two. Overall, Koepka finished at 2-under par, three shots better than Phil, but five shots back of first-round leader Matt Kuchar.