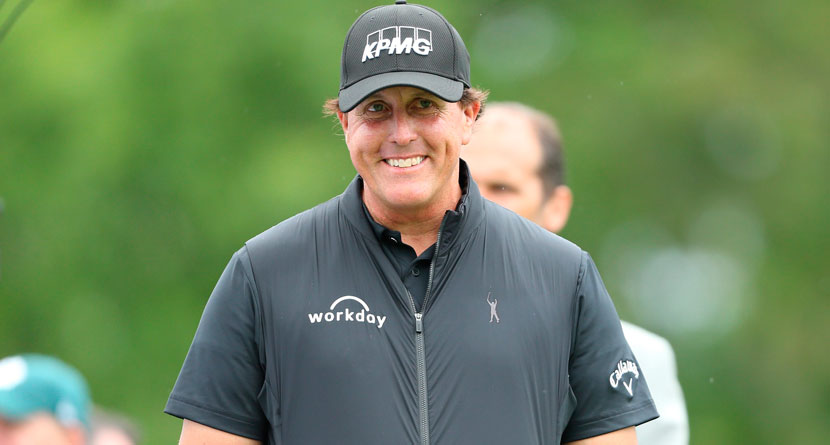 Like the Jelly of the Month Club, Phil Mickelson’s social media presence has been the gift that keeps on giving the whole year.

When he’s not hosting fellow Tour pros or multiple Emmy-award winning actors, Mickelson can be found in the comments sections of Instagram or in the replies of Twitter post.

With a few weeks off in between the CJ Cup in South Korea and this week’s WGC-HSBC Champions in China, Mickelson found some time to pile on Bryson DeChambeau as the 26-year-old posted a few videos of his workout routine that he promised would have him looking like a “different person” when he returns to Tour competition in 2020.

“I’m going to come back next year and look like a different person,” he said after the final round of the Shriners Hospitals for Children Open in October. “You’re going to see some pretty big changes in my body, which is going to be a good thing. Going to be hitting it a lot further.”

Last week, DeChambeau showed off some of the progress he’s made in the first few weeks since his declaration and his peers weren’t far behind with their jabs.

“Prior weight was 195 and I’m aiming to get to 230,” DeChambeau captioned the four-video post. “Currently sitting at 220 so getting close!”

While the likes of Rickie Fowler and Andrew “Beef” Johnston left comments, Mickelson came in from the top rope with a little trash talk. “Nick Faldo, although he was one of the greatest to ever play, had a massive upper body but did NOT hit ?’s,” Mickelson wrote. “Why? Because he neglected his calves.

“You may want to refocus a bit or you’ll be hitting first into the green every time we play. Just saying.”

Given Phil’s penchant for calf workouts and his proclivity to talk about hitting “bombs” in his numerous other social media videos, it’s safe to say that he’s holding the keys to his social media accounts (unlike other big-name pros), which makes the genuine and good-natured trash talk even more entertaining for fans.