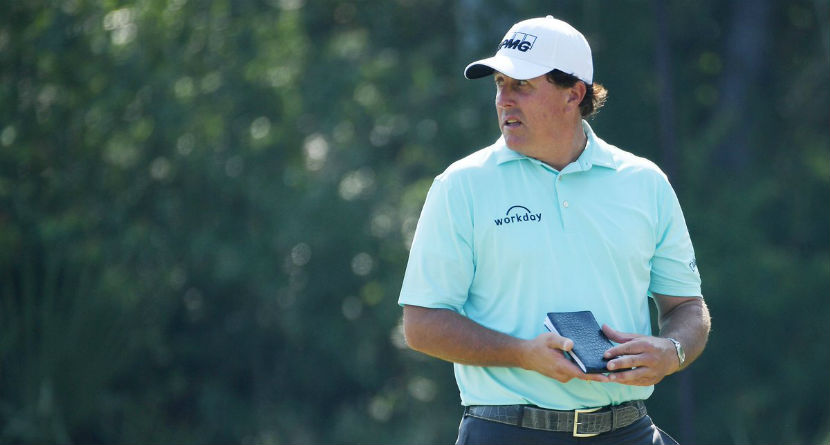 With the Presidents Cup just over a month a way, teams are starting to take shape and players on the bubble only have a couple more chances to prove they deserve a spot on the roster. One person currently on the outside looking in for the U.S. side is Phil Mickelson.

However, Phil isn’t your average golfer potentially vying for one of two captain’s picks. Lefty has played in 22 consecutive team events (Ryder and Presidents Cups) – and it appears he may have some pull to get onto his 23rd.

“I will probably leave it up to Phil at some point telling me if he thinks he can be ready to play, if he’s capable of helping out and then I’ll ask the rest of the team,” U.S. captain Steve Stricker said, according to PGATour.com.

On Thursday after an opening round of two-over par 72 at The Northern Trust, Mickelson was asked by the media if he would pick himself to represent the U.S. squad at Liberty National at the end of September.

“I’m going to see how these next two weeks go,” Mickelson said, referring to the final two PGA Tour events that count towards earning one of 10 automatic spots. “I’m very optimistic on the way I’m playing, but the scores are not reflecting that yet. If the scores start to reflect that, I think I’ll be able to bring something to the table.”

Make no mistake about it, Lefty wants to be part of this team, and naturally, he’s optimistic.

“If there are other players that bring more to the table and are playing better, then they need to be on it. Because you can also look at it and say I’ve had the opportunity to be a part of a number of them, so it would be great for others to do that, too. But I’m not quite ready to pass that on yet. I want to be on the team,” he said.

“I’m starting to feel a lot more relaxed. I don’t feel like I’m fighting it out there anymore. It’s starting to come around.”